Dolo is the kindness of strangers as an app. Where’s the prettiest place in the park? What’s the best thing on the menu? How do I skip the line? Dolo lets you leave helpful suggestions for anyone nearby. The new social app launches out of beta today to augment the world with serendipitous tips from strangers. Built by two ex-Apple employees and backed with pre-seed funding from Floodgate, Dolo could reveal the secrets and potential friends hidden in the ether around us.

Like any new social app, Dolo will have a steep uphill climb to user growth. There are also apps like Foursquare, guide books like Lonely Planet and social networks like Facebook and its Recommendations feature to compete with. But they’re often bloated, outdated or unfocused. Dolo hopes to build a new community around turning the whole world into a bulletin board. 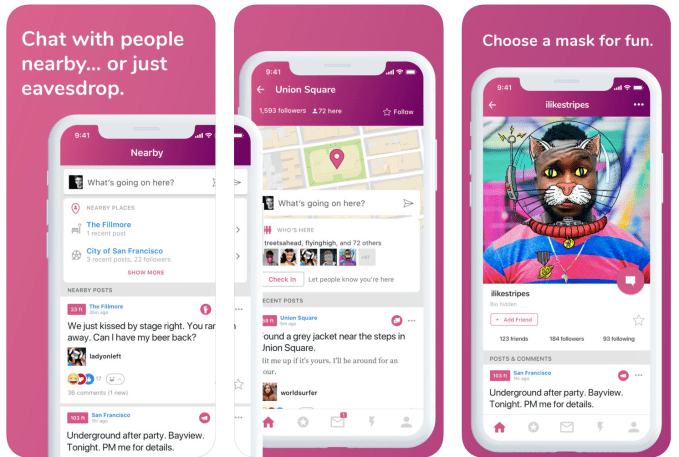 “If you take the construct of a cocktail party or a neighborhood bar, people feel more naturally ‘allowed’ to just mingle, eavesdrop, start a conversation or even meet someone new,” says Dolo co-founder and CEO Raja Haddad. “In larger spaces (a park, a neighborhood, a city), there are no vehicles today that allow such frictionless, comfortable, fun socializing.” That means a local expert’s knowledge ends up trapped while tourists and first-timers wander aimlessly.

Haddad and co-founder Benjamin Vigier met when they joined Apple in 2010 and worked on its Apple Store App before Haddad move on to Apple Watch marketing and Vigier helped develop Apple Pay. They later met Andy Mai at Coachella, who grew the Men’s Fashion Advice subreddit to more than a million users. Together they set out “to enable serendipitous ways for people to socialize with other people around them, regardless of their pre-existing social bubbles.” 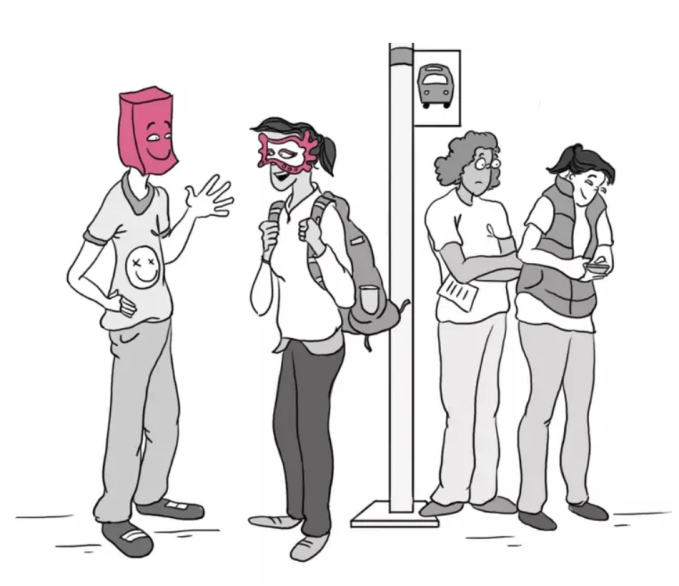 Dolo’s iOS and Android apps are now open everywhere, but it’s currently focusing on the San Francisco Bay Area, where it centered its 4,000-user beta. The app starts with a feed of the closest tips that automatically re-sort as you move around. Anyone can post that “I need some info or a favor,” “folks need to know this,” “I’m proposing an event,” or “just chatter and banter.” For example, my first contribution was that you can skip the line at famously overpopulated ice cream shop Bi-Rite Creamery by walking down the block to its soft-serve froyo window near SF’s Dolores Park.

That popular hipster picnic spot is actually where Dolo gets its name. And no, it’s not the same as the now defunct “bespoke app” called Dolo from 2013 that just helped you locate your friends in that park.

I was impressed by Dolo’s approach to safety and moderation that other anonymous and hyper-local apps like Yik Yak and Secret neglected until bullying led to their demise. You can use your real name or a pseudonym on Dolo, and choose a pixelated filter or mask sticker to obscure your face from the public. But then if you connect as friends with someone on the app, “the masks come off,” Haddad says, and your profile’s bio is revealed. Meanwhile, users are empowered to moderate comments on their own posts by getting alerted to flags that Dolo reviews too. And all photos get reviewed by a crowdsourced moderation service.

Dolo smartly plans to “focus on achieving density versus going directly for top-line scale,” Haddad explains. That mirrors Facebook’s growth strategy that tried to get lots of users at specific colleges or locations so they don’t enter a ghost town, rather than immediately striving for global scale. It’s already raised $680,000 in a pre-seed round a year ago, but will try to raise a seed round early this summer. It hopes to put that cash into product development, and marketing activations at colleges and public places in the fall.

Advertisers might be keen to reach potential customers when they’re super close-by and looking for local information. But that will require plenty of users, as well as a tough-to-scale local ads sales team. Haddad admits, “It’s obviously very challenging to get a social platform off the ground, particularly one that relies on location and density.”

Nextdoor has at least proven that people are interested in local info, given it’s active in 160,000 neighborhoods. The question is if an app designed to alert you to what’s around you anywhere, rather than just close to home, will have the same legs. Dolo will also have to outlast specialized apps like Wildfire for celebrity sightings and safety alerts, Citizen for crime mapping and Hive Social for interest-based communities.

It’s somewhat depressing, but an app like Facebook that already has ubiquity, frequent use and local ad relationships might be better equipped to build this product than a startup. Dolo will have to figure out how to make adding and observing tips a constant enough behavior that users don’t forget about it.

But at least Dolo isn’t burdened by a hundred other features crowding out the local recommendations for attention, nor is it constrained by relying on your existing friend graph. A dedicated app for the insights of passersby holds the promise of not only illuminating what’s around us, but also mending our polarized society.