RealSelf, an online community where people can ask questions, share their experiences and connect with doctors providing cosmetic treatments, has raised $40 million in new funding — its first round of financing since the $2 million raised in 2008, two years after its founding. The round was led by Elephant, a VC firm co-founded by Warby Parker co-founder Andy Hunt.

Hunt will also join RealSelf’s board of directors with the close of this round.

RealSelf offers one of the largest online communities for those who want to learn more about cosmetic procedures, including plastic surgery and other non-surgical treatments, like Botox injections. It’s the sort of thing people don’t necessarily want to talk about openly on social networks, but RealSelf has found a way to get people to socialize around the topic. Its users — anonymously — post reviews, have discussions, ask questions and even detail their progress in post-op photos series.

Reading through someone’s experiences not only gives people better insight into what a procedure is like, it also provides an emotional support system for those who are recovering.

The idea for the company came from Expedia alum Tom Seery, following a discussion he had with his wife about how hard it was to get the true story about which cosmetic treatments are actually worth the cost and show results. RealSelf’s goal is to bring more transparency to a market where customers before had been sold on promises and hype, often by doctors who would gloss over the downsides — like months spent in painful recovery — or the potential bad outcomes from riskier procedures.

Since its launch, RealSelf has grown to include more than 2 million anonymous patient reviews, ratings and photos regarding hundreds of different aesthetic procedures.

And demand for this sort of information continues to grow, along with the overall market.

Last year, for example, there were more than 17.5 million surgical and non-surgical cosmetic treatments performed in the U.S., up from 13.1 million procedures in 2010, the company notes. Much of that growth comes from minimally invasive, non-surgical treatments, which outpaced surgeries nearly eight to one.

With more people looking for information about these procedures online, RealSelf has seen its visitor counts climb. Last year, nearly 94 million people visited the site from more than 100 countries — a metric that’s up more than 270 percent since 2013; 40 percent of those visitors were from outside the U.S.

In addition to helping users network and review their own treatments, RealSelf also allows doctors to answer users’ questions, create profiles, share their own before-and-after’s and offer consultations to those who contact them.

The company makes money by offering these doctors a way to target their potential customers, and has been profitable for years as a result.

Every month, RealSelf facilitates around 500,000 connections between consumers and doctors, the company says. 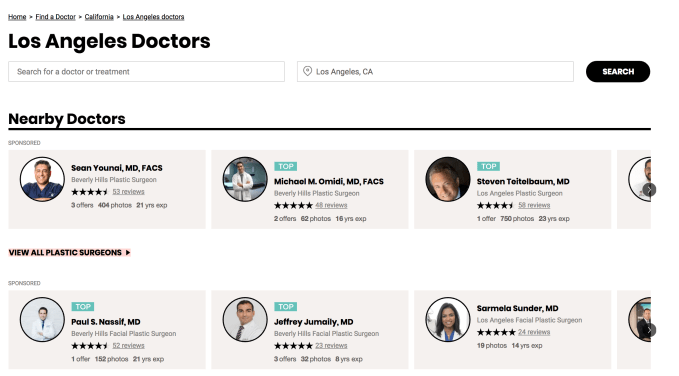 The funding will allow RealSelf to add fuel to its fire, says its founder.

“Our investors bring incredible experience and insight in building household name brands and businesses for the long-term. I am thrilled to have Elephant and our other new investors join our roster and welcome Andy to our board,” said Seery, in an announcement about the round. “We’ve bootstrapped RealSelf into a market leading position that helps millions learn about cosmetic treatments and connect with doctors. Now is our time to step on the gas. We are doubling down to grow awareness, drive innovation and extend our global reach to help anyone considering cosmetic treatments make more confident decisions,” he added.

The company, which already has more than 200 employees, plans to hire “significantly” this year, and double its office space in Seattle’s Pioneer Square neighborhood in June. It has also just brought on its first CMO, Tanja Omeze, previously the head of marketing for the Amazon Video Store, and who has led marketing at Weight Watchers, Verizon Wireless and Scholastic.

“Tom and the team at RealSelf have done an amazing job building a trusted marketplace where consumers and medical experts come together to share information and connect,” said RealSelf’s new board member, Hunt. “Historically, we have invested in companies that provide consumers with transparency in complex markets. RealSelf has built the leading platform allowing consumers to find detailed information, share stories and make better, safer decisions about extremely personal aesthetics choices,” he said.