The majority of consumers in the U.S. and Canada are no longer interested in hefty pay TV packages filled with channels they don’t watch. According to a new study from TiVo out this morning, 77.3 percent now want “a la carte” TV service – meaning, they want to only pay for the channels they actually watch. And they’re not willing to pay too much for this so-called “skinny bundle,” TiVo found. The average price a U.S. consumer will pay for access to the top 20 channels is $28.31 – a figure that’s dropped by 14 percent over the past two quarters.

In Canada, the average price consumers will pay is $25.56, which is down by 20.1 percent over the past two quarters.

TiVo’s findings are based on larger study of video trends across North America, which involved a survey of 3,081 respondents over the age of 18 in Q1 2017. The majority of respondents in the study (84.8%) reported they still had pay TV service, but the number of those who said they had cut the cord (21.8%) had grown by 4.4 percent from TiVo’s report a year ago. 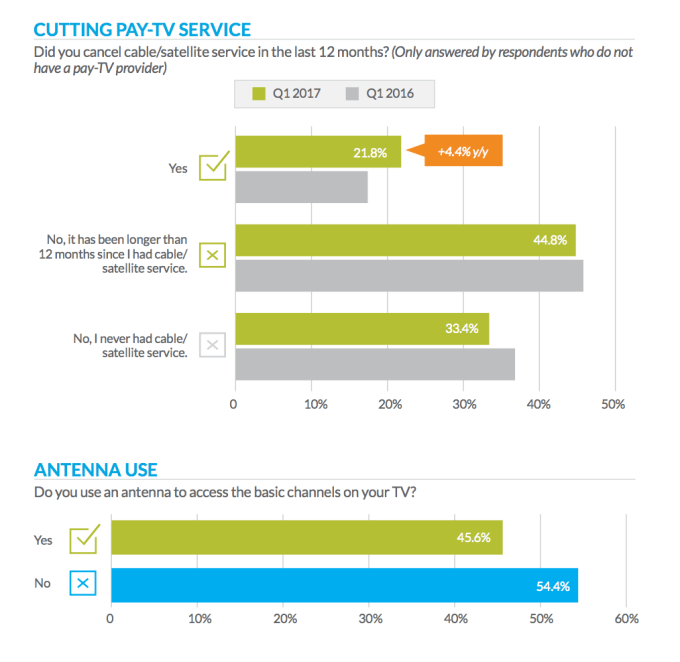 Around half of the cord cutters (45.6%) said they use an antenna to get their basic channels, and an even larger majority (57.6%) said they’re using an internet streaming service like Netflix, Hulu, or Amazon Video.

What’s more notable is that the subscribers to these over-the-top services are climbing. They’re also spending more of their time binge watching their way through their shows, and getting addicted to their original content.

Not only did the number of over-the-top and subscription service subscribers increase by 10 percent since the last quarter, those who said they prefer to binge shows was also up by over 8 percent. Meanwhile, 14.6 percent said that most of the TV viewing was original programming on streaming services – an indication that the investments companies like Netflix, Amazon and Hulu are making into their own content is now paying off.

TiVo’s study attempted to determine what’s driving cord cutting, as well. This follows a comScore report from earlier this week, which pointed towards financial reasons, as well as a desire to just watch less television in general, among U.S. cord cutters.

The TiVo report generally backed up those findings, noting that people’s biggest reason for cutting the cord was the price of pay TV. Nearly 80 percent said that pay TV is just “too expensive.”

Unbelievably, 37.1 percent of the survey’s respondents said they were spending at least $101 per month — with some spending more than $150 per month — on pay-TV services alone. 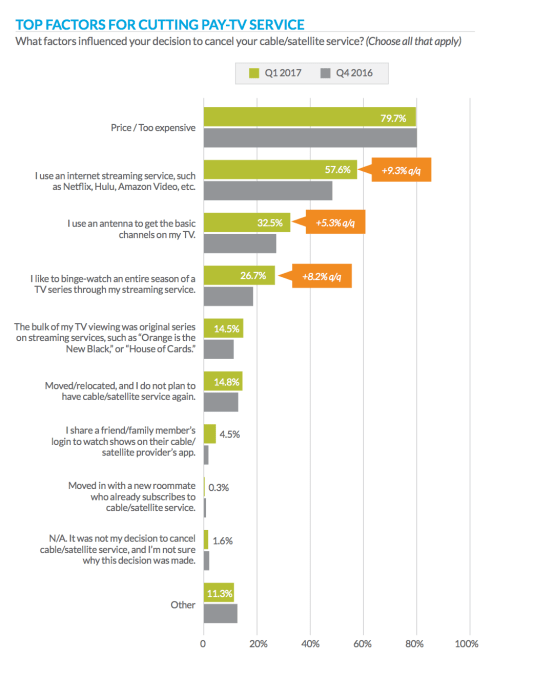 In addition to price concerns, streaming service users seem to be drawn to the newer, more personalized format for discovering programming, as compared with the traditional TV guide. For example, 57.7 percent of Netflix users take advantage of the profile option that gives family members their own profile with personalized recommendations and watchlists. 40.7 percent said they liked suggestions that were based on what they had previously watched.

This lack of personalization could be helping to push consumers further away from pay TV, in favor of streaming services. 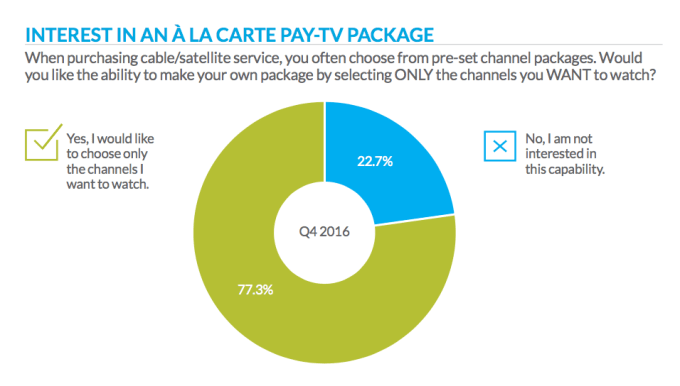 Perhaps because of the rise of streaming services, respondents also said their ideal TV lineup now only includes 19 channels, which they’d pay for at a rate of just $1.62 per channel, on average. The top five requested channels were ABC, CBS, NBC, Discovery Channel and History – the same lineup Q2, Q3, and Q4 2016, and now, Q1 2017. What’s funny is that being able to access broadcast stations is something that’s difficult to do today through live TV streaming services due to affiliate licensing agreements that limit their distribution.

TiVo’s report comes alongside other industry news that indicates that the size of the broadband market has now reached the size of the pay TV market, here in the U.S. That could push larger providers to raise the cost of broadband, to make up for the declines in the number of pay TV subscribers. The full report is available here.