In 2013, Twitter launched a beta testing program for Android that allows users to try out new builds of the Twitter application as well as test experimental features ahead of a public release. That program has now made its way to iOS users, Twitter confirms to TechCrunch after we received reports from several users who were being asked to join via a message displayed in their Twitter app.

Some Twitter users told us they were shown a pop-up notification at the top of their Twitter feed in their iPhone app which asked them to sign up for the “Twitter for iOS Experiments Program.” The program is described as a way to help Twitter test fixes and new features, and is being distributed by way of Twitter’s own Crashlytics service.

Crashlytics, a crash reporting service acquired by Twitter in 2013, is a part of the company’s broader Fabric mobile development platform. The following year after its acquisition, Twitter launched “Beta by Crashlytics,” an app beta testing platform, and competitor to HockeyApp and Apple’s TestFlight, that allows developers distribute apps and collect feedback from users while also tracking bugs.

According to public documentation detailing Twitter’s new iOS experiments program, volunteer testers will be given access to experimental versions of Twitter’s application, including confidential features that they must agree to keep secret. That means if you join the program and see something interesting in your beta build of Twitter for iOS, you can’t…well…tweet about it, or share it with others. (Entirely unrelated: did you know TechCrunch has an anonymous tips line? Anyway!)

Reports of the program’s expansion to iOS have been floating around for months now – a user on Reddit, for example, actually spotted the support documentation back in March. And in April, a few Twitter users tweeted that they were asked to join the program, but when they clicked the invite link to sign up, they found the link was broken. 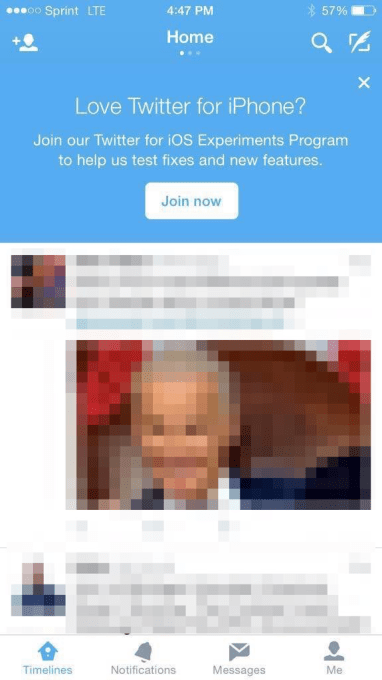 We received only a handful of reports about the Twitter for iOS Experiments program, which indicates that it’s still in the early stages. According to people familiar with the program, we understand that it currently has several hundred participants, but Twitter plans on growing this further.

In addition, Twitter is recruiting from specific regions around the world – not just the U.S. It’s unclear at this time how testers are being chosen for inclusion.

There’s not a way for interested users to request to join the Twitter for iOS Experiments program, which differentiates it from Twitter’s earlier efforts with its “alpha” and “beta” programs for Android users.

And because feature experimentation is up to the product and engineering teams at Twitter, it’s possible that the Android and iOS beta testers will be shown different experimental features. Not all these features will make their way to a public release, of course. Instead, these programs serve as a way to not only catch bugs early, but to see how certain features may resonate with Twitter’s user base before they’re rolled out publicly.

When an invitee receives the invite link, they’re taken to a mobile-optimized website on twitterfeedback.force.com where they’re instructed to provide their Twitter email address and username. According to documentation shown to testers that we’ve seen, Twitter says it will email instructions on how to install Beta by Crashlytics in order to download the experimental app after testers are accepted into the program. The beta app will replace the current Twitter app on the tester’s iOS device.

The email address will also be used to create an account on an online forum where users can collaborate with other testers. Users will receive email notifications about Forum activities, which they can unsubscribe from if they choose. If a user decides to leave the program, they can simply uninstall the beta app and re-download the public build from the App Store instead.

Twitter today makes a number of public changes to its mobile client applications and its website in an effort to make it service more usable, safer, more secure, and more entertaining. In recent days, it has pushed out changes focused on fighting abuse as well as those making longer conversations easier to read.

But not all of its updates have been warmly welcomed – some users didn’t like the ‘while you were away‘ recap feature introduced last year, and in 2013, users fought against the thin blue “conversation line” when Twitter introduced it as a way to connect related tweets. With access to beta testers’ data, however, Twitter can better determine if a new feature increases usage and engagement times, even if users are vocal about the changes themselves.