Twitter is the latest tech company to launch a beta testing program on Android, via the Google Play app marketplace. The company has begun taking sign-ups for its “Twitter for Android Experiment Program,” which will allow users to register to test the latest, unreleased builds of Twitter’s Android application. 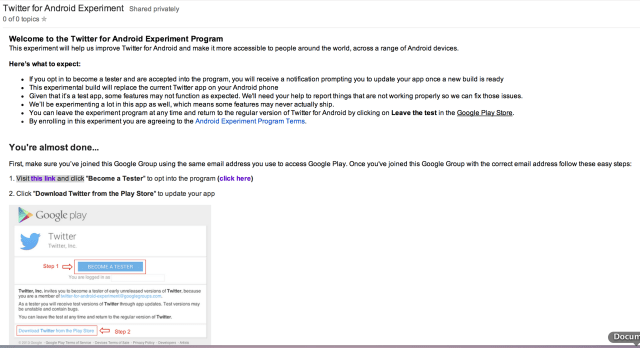 Users who participate in the beta testing program will receive a notification to update their app when new builds are ready, and this build will replace the current Twitter for Android app on your phone. In other words, if using Twitter is mission critical for you on a day-to-day basis, this may not be the beta for you as Twitter warns that “some features may not function as expected” – a nice way of saying a test build is likely to be buggy.

But on the flip side, Android beta testers will get to play around with new features before Twitter launches them publicly, and they may also get a chance to try out features that Twitter decides to never actually ship.

After you join the Google Group, to continue the process of becoming a tester, you have to Visit this link to then opt in to the program. Again, users are warned that test builds may be unstable and contain bugs, but if you choose to proceed the final step is to simply download the Twitter app from the Google Play store. 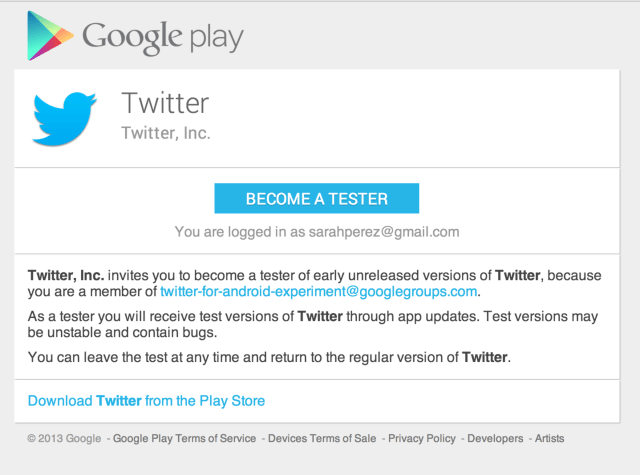 News of the Twitter Beta Program was first spotted by a couple of Android watching blogs, including Planet Android and Android Police.

Twitter for Android beta testers will certainly have their hands full with new features to try out, given the number of experiments Twitter has been running lately. The company recently began testing a new “TV Trending” box at the top of the timeline, as well as a feature which alerts you about live events that are happening nearby. Each time Twitter declined to comment about these initiatives, instead pointing TechCrunch to its blog post about “Innovation through experimentation.”

The company also radically overhauled their “Conversations” view feature this week, to make the service more accessible to new users. These changes aren’t meant only to make the Twitter product itself better, but also to help the company generate new revenue streams through advertisements and partnerships, ahead of an IPO.

Twitter is not the only company to turn to Google Play as a beta testing grounds. Other social services have also begun running beta tests there as well including both Snapchat and Facebook.