Twitter today has taken another step aimed at helping its users fight abuse on its network – the company has introduced a new feature that allows users to share block lists with one another. The idea is that by opening up these blocking tools to the wider community, users will be able to more quickly and easily block multiple accounts at once.

Individual users today can mute and block accounts that are engaged in trolling, spam, abuse or other unwanted behaviors. But handling this on a one-off basis can become time-consuming. By letting users share their own block lists with each other, users will be able to import a list of known problem accounts and immediately block them all at once, which greatly simplifies the process. 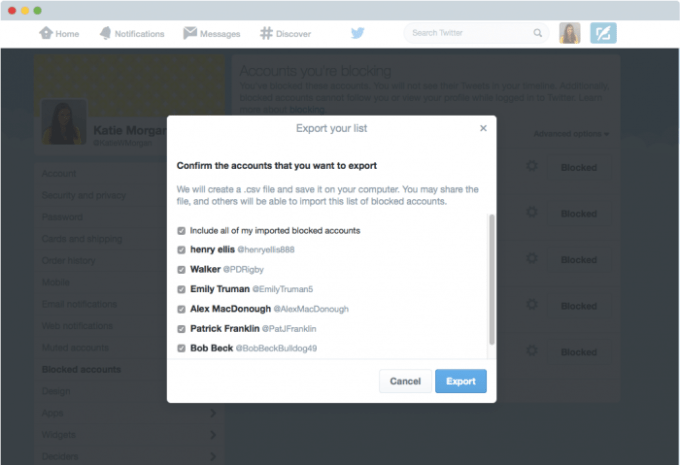 The import/export tool also allows you to review the list before you export it, in order to deselect any names you don’t want included. The list is created as a .CSV file that can then be sent to others however you choose. 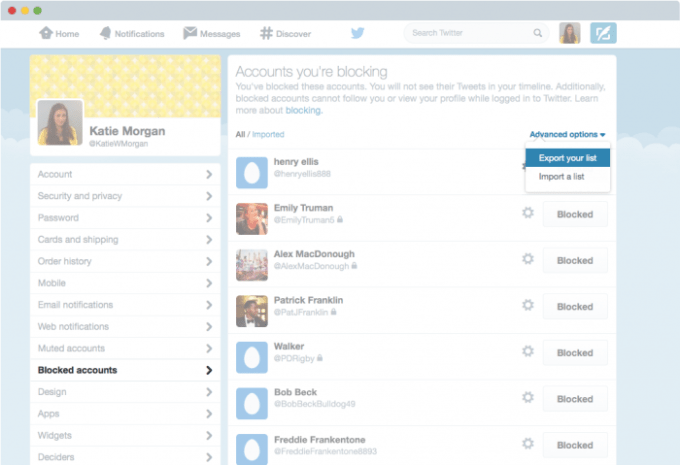 The solution could help those in larger organizations, where community managers for various business units could share their own block list with fellow colleagues internally. But it could also go a long way to help those in larger online communities block users who regularly threaten or abuse people who discuss and share opinions on topics that tend to attract online trolls.

Twitter has faced a number of problems on this front in recent months, including the GamerGate saga, which involved women in the gaming industry facing violent and misogynistic harassment that included death and rape threats, the revealing of their personal information (including home addresses), and the sharing of other graphic material.

Minorities have also faced trolling from hate groups on Twitter. Public figures and celebrities are often threatened, and even jihadists have used Twitter’s platform to spread propaganda.

To combat the rampant abuse, Twitter began updating its abuse reporting mechanisms in earnest starting last year. In December, the company rolled out new tools that allowed users to more specifically detail their abuse and made changes to how Blocked Accounts operated. Since then, Blocked Accounts can’t view your profile.

In March, Twitter introduced features that made it easier to report threats to the police, and in April, Twitter updated its policies on violence and threats, which also gave the company the right to lock abusive accounts for periods of time.

Twitter notes today that it’s working on other controls that will help to limit abuse on its platform and will make further announcements about those in the “near future.” In the meantime, details on block list sharing are here.