This is a short post because it’s important but not worth belaboring. This morning, CryptocoinsNews posted a piece on Leah McGrath Goodman, the reporter who claimed to have found the real Satoshi Nakamoto. Goodman posted a Facebook update essentially telling her friends that she is in the mountains where she is practicing shooting firearms at night. She said of Bitcoin fans who were harassing her that “They will see this in a different light once they reach puberty” and dropped a few sarcastic remarks regarding community. Yes, it’s true she’s acted like a dick (presumably in private) and it will be quite a sight to see what happens when her story is disproved. Schadenfreude and all that. But why is she practicing shooting firearms? And why is she angry and scared?

Check out the comments: 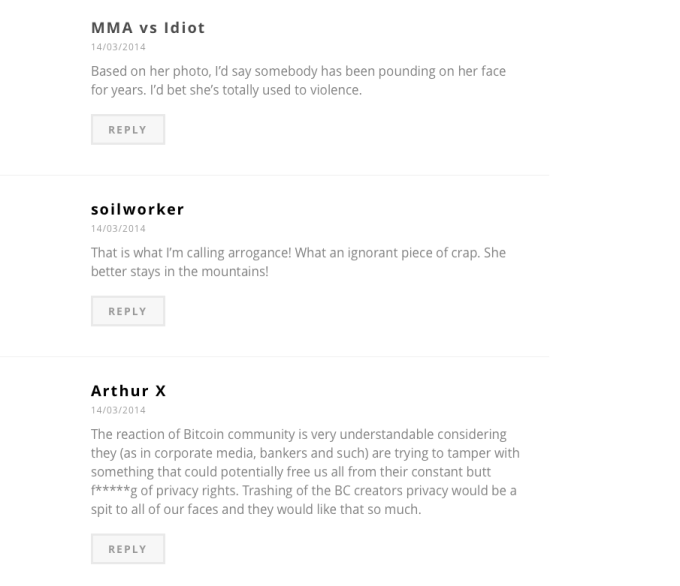 Misogynistic threats of violence and intimations of battering are even bigger bullshit than anything McGrath Goodman has dished out and it isn’t right. The Internet’s tendency to breed obsession is dangerous and allowing this sort of interaction is exactly what makes Bitcoin look like greasy kids stuff rather than an intelligible movement towards frictionless commerce. Newsweek, a magazine with a long and storied reputation but with little skill at writing about technology, is wrong here. The reporting is shoddy. The hubris is palpable. But let the story die out. Today’s front page story is tomorrow’s fish wrapper.

But stop the name calling. Stop the harassment. It isn’t worth it. I ask you to work together to help those who find it necessary and dissuade them. I’m doing my limited part. Discourse is the exchange of information, not vomitus.

To be clear, the various sites I read are almost, to a one, written intelligently and calmly. The discourse is definitely improving and good men and women are stepping up to the plate to educate the world in where we’re ultimately headed. But all it takes is one nasty comment to incite another holy war. And that’s what this is – a holy war against blasphemers.

Charges of blasphemy, as anyone who has been stoned in a courtyard for saying something irreligious can tell you (if they lived), is the best weapon of the nihilistic fanatic.

This isn’t dad telling the kids to clean up. This is a concerned reporter who sees something he loves being torn apart by ignorance. I have a couple pet concepts that I love – hardware, the maker movement, cryptocurrency, and 3D printing are a few of the major ones – and each of these amazing fields is maturing in ways I could never imagine. I’ve seen lots of things blossom over my career and I’ve tried to champion the ones that truly mattered. Bitcoin truly matters. Let’s push things forward, friends, and leave the name calling for the kids who are sniping me in Titanfall.