If you’re like me, you have a difficult time determining what to cook for yourself every week, and then wander around the local grocery store purchasing a collection of ingredients that may or may not fit together. And, a week later, you throw away whatever you didn’t use and start again. Well, a new service called PlateJoy aims to change that, by helping users create a meal plan and having healthy ingredients delivered to their doors.

As food services go, PlateJoy isn’t quite a meal delivery service so much as it is designed to make planning and eating healthy meals easier for its users. It follows on the trend of startups like Plated or Blue Apron, both of which ship fresh ingredients and recipes to users to be cooked at home.

All of PlateJoy’s meals are designed to be very quick and easy to prepare: Suggested breakfast and lunch options can be prepared in less than 10 minutes, while dinner is more like 30 minutes. And they’re all prepared with fresh, healthy ingredients that are delivered by a local grocery service near the user’s home.

I signed up and tried out PlateJoy for myself, just to see what all the fuss was about. When you sign on, you tell the service how many people you’re cooking for, and you’re offered the choice of different breakfast, lunch, and dinner items. As a user cooking for one, I chose both lunch and dinner, and picked three different options from each. That would give me enough food to last me about week, as each of those meals could be prepared twice… or, with dinners, I’d have leftovers for another night. 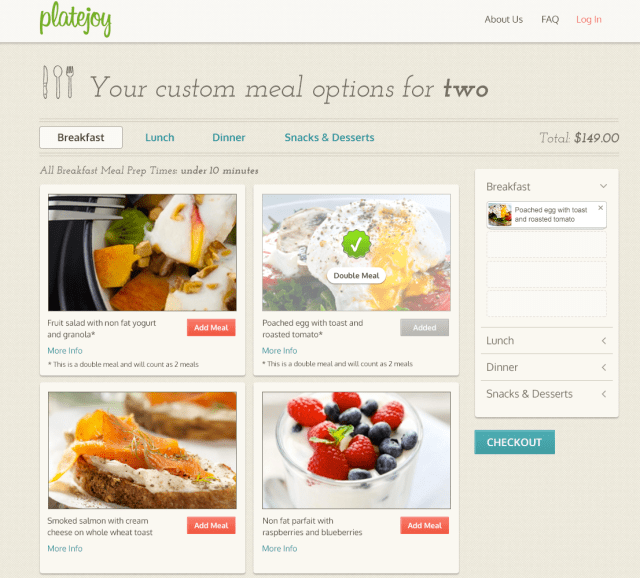 A day later, I had someone from Whole Foods at my doorstep dropping off a couple of bags of food. I also received a printout with recipe directions mailed to me (how quaint)! And with that, I was ready to start making meals. There was just one problem… I was feeling kind of lazy Friday night and so I went out to dinner instead. And then I spent all day Saturday hanging out with my girlfriend and a couple of friends.

Finally, on Sunday, I made my first PlateJoy meals — one at lunch, one at dinner. For lunch I had a chicken avocado wrap with raspberry vinaigrette, and for dinner I had salmon with strawberry salsa and brown rice. Both things that I wouldn’t have necessarily picked for myself, but both pretty good. And relatively easy to prepare, although I think my cooking times were a little bit longer than 10 minutes and 30 minutes, respectively.

Ostensibly, PlateJoy was created to help users plan meals and to reduce the amount of food they throw away, by delivering only what the user needs. On the back end it works to determine which ingredients can be reused between meals to eliminate waste and deliver just the right amount of each. It’s estimated that food waste costs consumers about $2,200 annually per household, or $165 billion annually.

As for the cost, I found it a bit high: For my six meals, I was charged about $100. I didn’t do a full-on calculation of the cost of ingredients, but figure I probably could have pulled them together for about $60 or less. But, that doesn’t include delivery or the cost of the service itself. [Update: I’ve been told total cost of my food was $92. So there goes that assumption.]

Co-founder Christina Bognet says the cost will be less per person as the service scales up meals — it’s cheaper to buy for bigger meals in general. And the company also will take into account ingredients that can be re-used week after week — for instance, the raspberry vinaigrette will last me a while.

For now, PlateJoy is launching in Boston and San Francisco, with help from grocery delivery partners Whole Foods and Peapod. Deliveries can be made next day, in any two-hour window between 10:00 am and 10:00 pm.