For the past several years, my New Year’s resolution has been some version of “cook more often” or “try a new recipe every week.” But it never really lasts. As much as I love the act of actually cooking, so much about it is a huge hassle — choosing a recipe, shopping for all the ingredients (and paying for a whole bottle of a spice I only need a tablespoon of), ending up with a bunch of leftovers.

Plated, which was founded last year by Harvard Business School alums Nick Taranto and Josh Hix, compiles gourmet recipes from noted chefs such as Michael Mina and delivers all the ingredients necessary to make a home-cooked meal — from the cut meat and chopped produce, right down to details such as a teaspoon of tumeric or a quarter cup of coconut oil — directly to your door. Plated costs $14 to $15 per plate for non-members, and as little as $10 to $12 per plate for members.

At the moment, Plated’s delivery area serves a swath of the United States’ Eastern seaboard from Virginia to New Hampshire, spanning a population of 52 million (since launching in late 2012 Plated has delivered “tens of thousands” of meals, Taranto and Hix said in a recent interview.) The funding means that Plated is working to expand that delivery area to other regions in the US in the coming months. Plated, which is currently working out of Manhattan’s TechStars incubator, is also actively growing its full-time staff, which now stands at 15 employees. 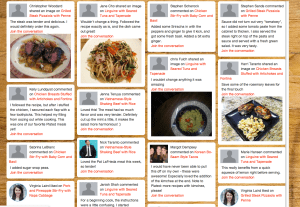 The seed funding also helped Plated develop a new social aspect of its service launching today called “Social Recipe Pages.” The idea here is to be a central place where people can share photos and relate cooking tips.

“With thousands of customers cooking the same meals on same night any given week, this will be a place for them to connect and engage with each other,” Taranto said. “They can talk about what they’re doing, share their personal takes on the recipes, talk to the chef who designed the meal, and ask questions.”

While Plated’s competition on the meal delivery side are services such as Seamless which deliver already prepared food from restaurants to young professionals and older empty nesters (which are Plated’s strongest demographic groups), the Social Recipe Page launch puts it into competition with the AllRecipes of the world. It’s an interesting next step toward Plated’s long-term vision, which goes well beyond ingredient delivery — it’s a larger goal of using technology to help bring us as humans back to our roots when it comes to food. Taranto puts it like this:

“As a working white collar professional, you spend the day at a computer. But there’s a visceral human desire to sink your knife into something. The creative process of making food, and sharing that with people you love most in life, is inherently human. The chopping, the boiling — people want to do that. The bigger picture is that we’re building the online food brand for 21st century.”

As a big idea startup with very unique business model, Plated will certainly be one to watch as it continues to scale.

Watch the video embedded below to see a Plated box and hear Taranto talk more about the company’s history and plans for the future.