Is your Bitcoin stash burning a hole in your digital wallet? Bitfash is a new startup that wants to help you spend your bitcoins on clothing from top fashion brands.

Based in Australia and China, Bitfash serves as an intermediary between retailers and shoppers, allowing them to browse online stores through its web platform. Purchases are completed by paying bitcoins to Bitfash, which then procures the items and arranges for them to be shipped directly from the sellers to buyers. Bitfash’s brand roster currently includes Zara, Forever 21 and men’s clothing retailer Mr. Porter. The startup will add a fourth brand in the next two weeks.

The site was launched in April by founders Chris Woods and Keyur Kelkar, who figured that Bitcoin traders might want to splurge their bitcoins on something.

“We started learning more about the space from an entrepreneurial perspective and saw that most businesses taking bitcoins are electronics-based,” says Woods. “So we tried to look ahead into the future and see where there is potential for mainstream adoption. [Kelkar] and I both have an interest in fashion, so it was a no brainer and that’s why we really went for it.” 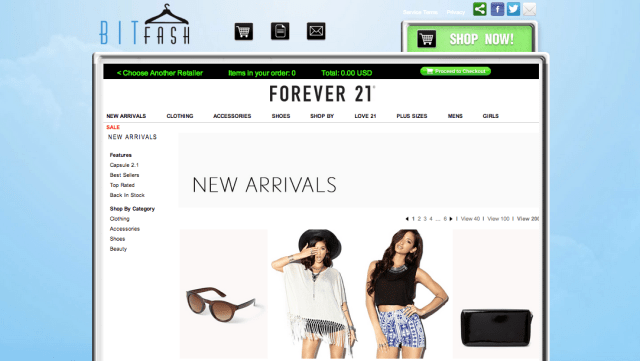 Bitfash joins a crop of other startups that offer services or merchandise for bitcoins, including food delivery service Foodler, BTCShop and mobile gift card app Gyft. Bitcoins received a burst of publicity due to price volatility in April, but Woods is not worried about its long-term prospects.

“What you will see going forward is stronger exchanges and more businesses, more regulation, bringing in new users and the currency will become quite steady,” he says.

Forever 21 and Zara were first added to the site because of their low prices and global brand recognition. Upscale men’s retailer Mr. Porter was chosen as Bitfash’s third retailer to add a luxury brand to the site and because the majority of Bitcoin users are male. Though the retail sites can be accessed through Bitfash’s platform, Woods emphasizes that Bitfash has not struck any commercial agreements with the companies featured on their site. He says, however, that Bitfash does not alter prices and shipping fees, and the store’s terms are strictly adhered to. For example, Bitfash does not ship merchandise to countries that the brands don’t.

Currently self-funded, Bitfash makes money through transaction fees, and Woods says the startup has been approached by online fashion retailers who want to be featured on the site. The company isn’t currently disclosing the number or monetary amount of the transactions it has completed since the site’s launch, but Woods says that most of them are male, tech-savvy and between the ages of 18 to 40. Most buyers are located in the U.S., followed by Asia and Europe. Woods says Bitfash has received hits from more than 100 countries.