Election-mania has driven more than 60% of Facebook users to engage civically or politically on the social network. Yet, most political posts won’t be seen by undecided voters in battleground states, instead being wasted on the ears of unregistered citizens, committed partisans, or those residing in guaranteed blue and red states. Team Romney has therefore devised a clever app that finds which friends are most likely to be influential on Election Day, given their geography and history of Facebook political activity. “All one needs to do is look at their own newsfeed to know that people want to talk about this election on Facebook; the question is, how can we make sure that activity is purposeful and effective at making a difference for the campaign,” says Matt Lira, a well-known open government advocate in Virginia Congressman Eric Cantor’s office, who now works on Romney’s digital team. 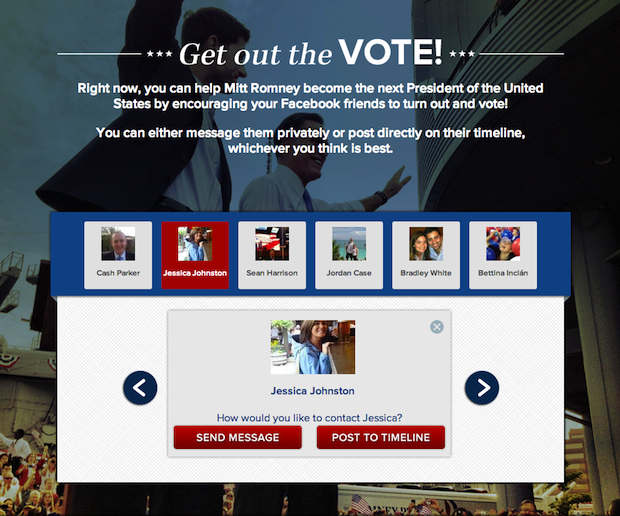 The app, first launched with TechCrunch, draws on Facebook’s “open graph” feature that permits software to personalize services based on a user’s information and activity history. “Commit to Mitt” unearths which friends live in influential states or have a (public) history of interacting with Romney’s facebook page and recommends messaging them. If users don’t have closeted supporters, or are likely to be more influential with a broadcast message, the app recommends posting a message to their wall.

The app is a welcome addition to the nearly 1/5th of social media users who admit to blocking friends who use the Internet as their personal political soapbox. Indeed, one Facebook app, Nopple (“no politics please”) automatically blocks political posts for those users who still want to be friends after the election.

Lira tells TechCrunch the first-of-its kind app was inspired by both a personal meeting with Mark Zuckerberg, during a well-publicized visit by House Republicans, and recent scientific evidence that Facebook political messages boost voter turnout. The study found that a mass get-out-the-vote campaign drove 2.2% more voters to polls in 2010. Most importantly, 80% of the effect was indirect, caused by friends sharing the message.

The study confirms other experimental evidence which finds that personal Facebook messaging can be more influential than broadcast-style wall posts. Personal messages “are better for building a loyal customer base and make a product stickier,” said New York University Professor, Sinan Aral.

If a pro-Romney message gets posted in a forest of California voters, and no battleground citizens see it, does it make a difference? Probably not. Now you can target Facebook pals who are not only influential but still want to be friends after hearing you talk about politics. Check out the app here.