Some of my friends are idiots. And by idiots, I mean they disagree with me about who should win the upcoming election. What’s worse, is that they continually post these erroneous opinions of theirs to Facebook, and back them up with statements which I can thoroughly debunk via Politifact. C’mon people, fact-check yourself! The thing is, I don’t have time to engage in inane political discussions on Facebook. They don’t change anyone’s mind, and only serve to turn people against each other. They’re not worth my time.

Thankfully, there’s a new Chrome extension that will help get me through this political season: noppl, which stands for “no politics please.” The Chrome extension, also available as a bookmarklet for other browsers, lets you completely hide unwanted political posts from Facebook. 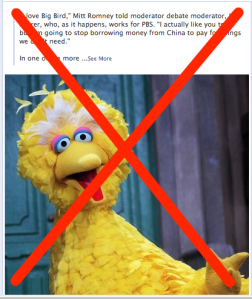 Noppl is a fairly bare bones effort, but it’s simple and it works. After installation, you just click the button and enter in the words you want to block. The extension has helpfully pre-filled in some suggestions for you, like “romney, paul ryan, obama, biden, election.” Of course, this setup means that you can also use it to block any unwanted content from Facebook, based on keywords. But I’m not sure why you would want to do that – after all, we already have Unbaby.me, right?

I didn’t care for Unbaby.me, since it’s somewhat mean-spirited. Your friends are having babies, and you just can’t stand to see the accompanying pictures? Then why are you friends with these people? But politics is another matter. I’m actually capable (OK, I try) of being friends with people who share differing views on the economy, government, taxes, etc., but I don’t really want my News Feed filled with these opinions, causing me to miss out on…well, you know…the important stuff on Facebook, like new and ending relationships, vacation photos, events and parties, and yeah, all those baby pictures.

Noppl was thought up by Kevin Faul, who had it built as a side project not related to his day job as VP of Product Management at RealD. “I’m not against politics,” Faul told me. “I just don’t want to be bombarded with political posts while on Facebook, and it turns out other people don’t either.” Noppl is his idea, but because he’s not a programmer, he had the folks at Agile Consulting build the extension for him, which is why the company is also credited on the noppl website. Faul says that the extension has actually been out for a few weeks, but he kept quiet about it because it still had a few bugs. Now, it’s ready to go, and you can grab it here.