One day after Apple’s big iPhone 5 news day, an accolade for Apple in the tablet category: J.D. Power and Associates has put the brand at the top of its annual tablet customer satisfaction survey. This is the first time that the influential pollster has tracked U.S. consumers on tablet usage — it is known for its mobile handset rankings, which Apple also topped for smartphones last week. Amazon and its Kindle Fire tablet are, however, nipping at Apple’s heels: the two were separated by only six points, with Amazon scoring particularly well because of its low price. Final tallies for the two brands were Apple at 848 and Amazon at 842, on a scale of 1,000.

In addition to ranking tablet brands, J.D. Power also looked at tablet usage. The 1,985 tablet owners who were polled reached conclusions that reflect what others have also been saying: the bigger touchscreen on tablets is making them a much stronger magnet for content consumption and user engagement than their smaller-sized smartphone cousins.

Tablet users are spending, on average, 7.5 hours per week on their devices, doing things like surfing the web, watching videos, listening to music, and reading books. That still puts it at a lower time than PCs, which clock up 9.6 hours of usage a week for the same activities.

Unsurprisingly, those who use their tablets more are also more satisfied with the tablet form factor. On a scale of 1,000, those who view three or more hours of video per week rated their satisfaction as 857, versus those who watched less rating at 812.

And the survey delivers a fairly clear message about the importance of getting the content right — in the form of apps and other services — for tablet makers’ bigger hardware businesses. Those who watch more than three hours of video are also 90% more likely to become repeat buyers of the same brand — the same percentage that said they would return to the brand if they were satisfied with it. However, those who watched less still seemed to show strong brand affinity, with 81% of them saying they would buy the same brand of tablet again. Some 37% of all respondents said they would be buying a new tablet in the next 12 months.

“As tablet computing, multimedia, display, and application offerings continue to evolve, their impact on usage patterns will continue to grow,” writes Dr. Uma S. Jha, senior director of mobile devices at J.D. Power and Associates. “Tablets are a force in the marketplace that offer a great alternative to laptops and netbooks.”

As tablets move more to becoming a replacement for people’s PCs, they have already passed smartphones in usage. The survey found that consumers who owned both tablets and smartphones spent 40% more time browsing the web on their tablets than they did on their phones. Gaming apps scored even higher, with 56% more time spent on tablets.

But it’s not just a consumer plaything: 25% of owners said they used their tablets for business. This, too, was something noted by Apple during its last quarterly results where it highlighted the rise of enterprise deals for its iPad. It’s something that we’ve heard anecdotally too from enterprise service companies.

In its tablet rankings, J.D. Power asks users to rate products in five categories and then weights them in different proportions: performance (26%), ease of operation (22%), styling and design (19%), features (17%), and price (16%). It notes that Apple’s score of 848 came largely from being the first in performance, ease of use, styling/design and features, while Amazon beat it out on price.

Indeed, while Amazon first entered the market with a $199 Kindle Fire, its latest line of tablets, announced only last week, pointed to the company moving into higher-end products, with the 8.9-inch HD model costing $499, comparable with Apple’s pricing. It will be interesting to see whether Amazon, going forward, will be able to hold its own against Apple in the other categories as it clearly will become less attractive on a pricing level. 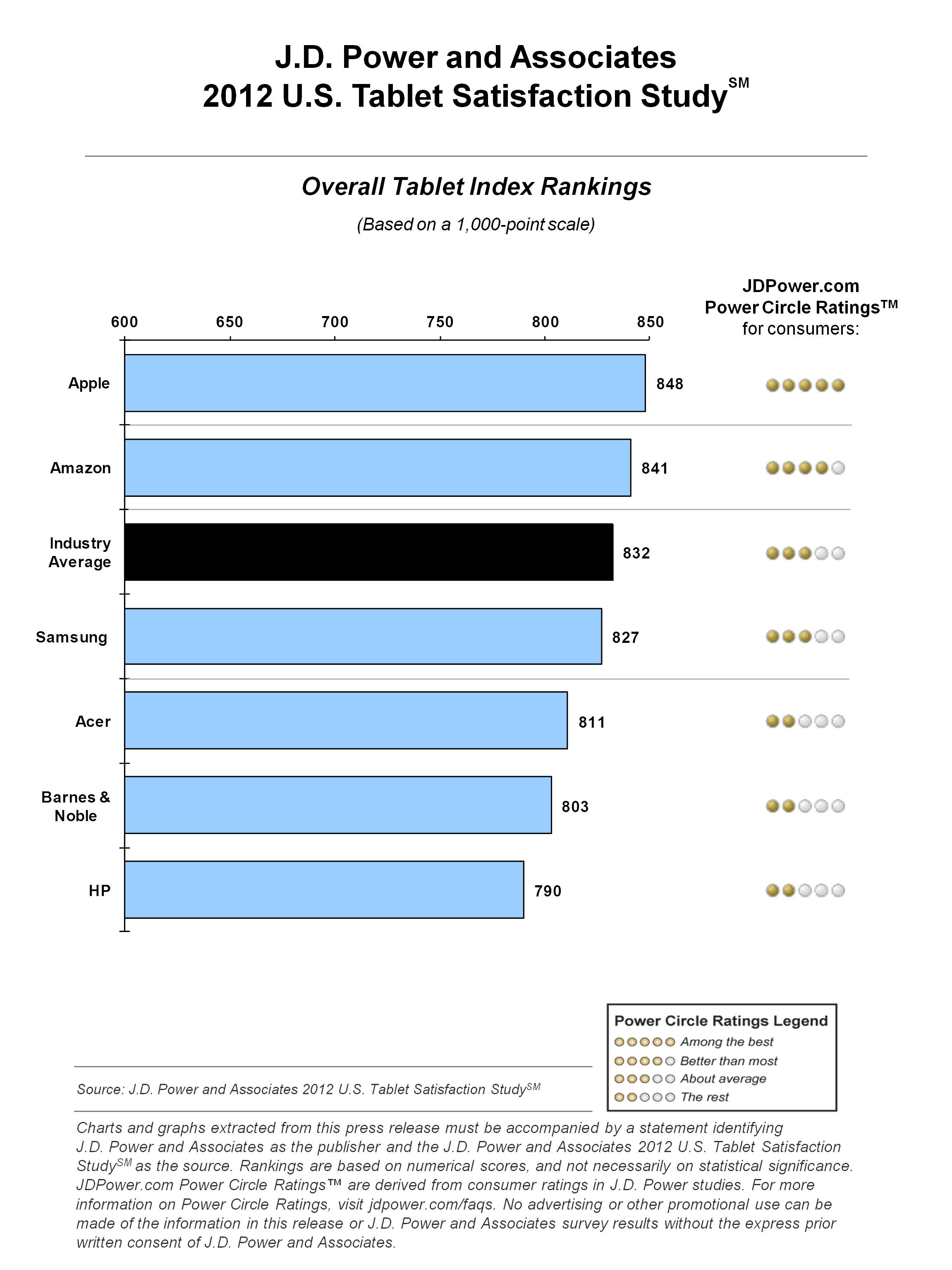