With Zynga launching its IPO road show today, all eyes are on the social gaming goliath Mark Pincus built on the Web. But the future of social gaming, as with so many things these days, is mobile, where Zynga admits (in its S-1) that it has “limited experience.” All you have to do, however, is look to Japan’s social mobile gaming companies like GREE and DeNA to see how much more lucrative social gaming could be once it goes mobile. I was just in Japan this week for a TechCrunch Tokyo conference, where I interviewed GREE founder and CEO Yoshikazu Tanaka (see video clips below). GREE is publicly traded in Japan with a market cap of about $7.6 billion, so we can compare its financials to Zynga.

Zynga has many more users worldwide than Gree (227 million monthly actives for Zynga versus about 27 million for GREE), but GREE’s economics are much more favorable.  GREE’s revenues are actually higher than Zynga’s (about $400 million in the September quarter versus $300 million for Zynga) and it is much more profitable. The slides in this post, which I obtained from Gumi,  a hot Japanese mobile gaming startup, illustrate the stark difference.  The slide below compares quarterly sales between Zynga, GREE, and DeNa (it is missing the last two quarters for Zynga, which would keep going up along the same trajectory at $279 million for June and $307 million for September). GREE expects annual sales to hit $1.7 billion this fiscal year. 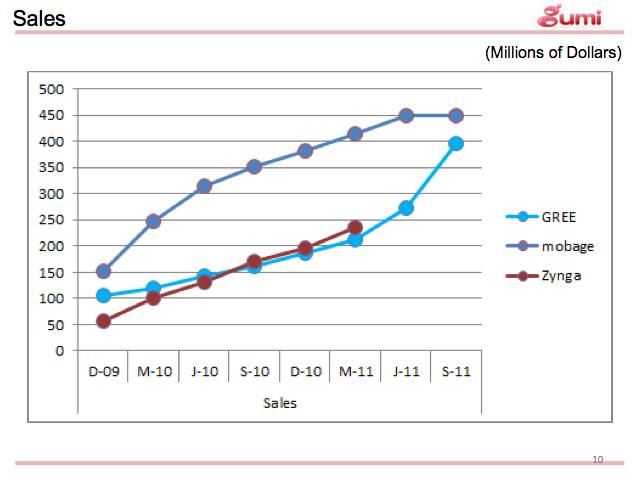 The slide at the top of this post, though, is the real eye-opener. It shows how much more profitable mobile social gaming is in Japan than Zynga’s predominantly Web-based social gaming.  Again, the slide misses the last two quarters for Zynga, when profits were $1.4 million and $12.5 million, respectively.  Both GREE and DeNa are smoking Zynga on profits, with about $200 million each in the last quarter.

How can this be when Zynga has so many more users than either of the Japanese companies? Only 6.7 million of those 227 million monthly active  users (54 million daily active) are paying customers. For mobile social games, at least in Japan, it is much easier to extract revenue from users (mostly through the sale of virtual goods, leveling up, etc). The monthly average revenue per user for both GREE and DeNa is between $4 and $5, which is more than three times as high as Zynga’s (see slide below).  Those are averages across all users.  The average among paying users is about $50 in Japan, with some addicted users paying twice that much.

GREE shifted from PC games to mobile four years ago. Zynga has a few popular mobile games already, and it is a major growth area for the company.  But can they successfully make the shift? “They have big success already,” notes Gumi CEO Hironao Kunimitsu, “so they think their way is perfect. As a social gaming company, Zynga is most successful. Most of their gaming is for the PC.  But mobile is the future of the Internet.”

The caveat to all of these numbers is that so far they are true only for the Japanese market, which may or may not foreshadow what will happen in the rest of the world. If they are a precursor of things to come, then Zynga’s future profits could very well hinge on the extent to which it can bring its social games to mobile. Bulls might want to buy Zynga at the IPO.  Bears might want to invest in GREE. 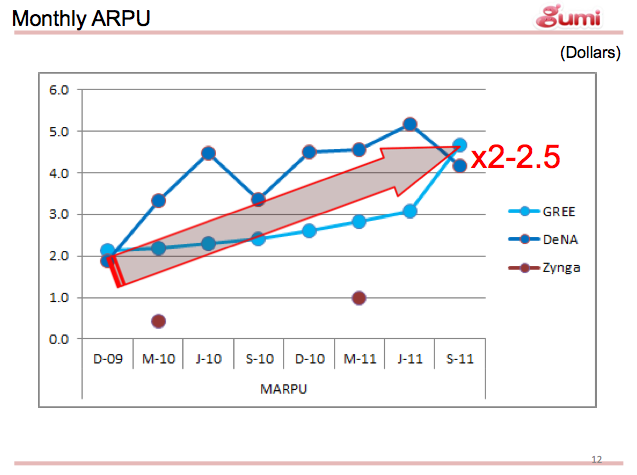