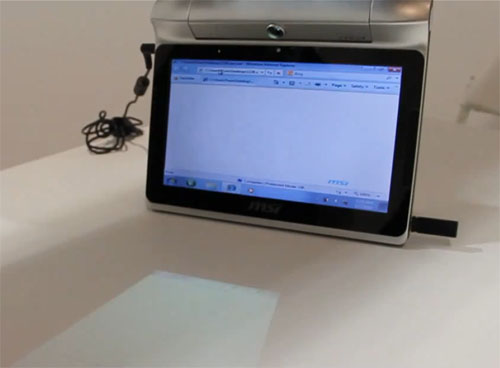 This is probably one of the more baffling concepts I’ve seen. It’s a 10-inch tablet from MSI with a projector mounted as a sort of rotating hat. There are two obvious applications: projecting an image on the wall behind the tablet (putting the image on a table results, as you can see, in a distorted image) and projecting a virtual keyboard. Of course, it can’t actually do the virtual keyboard thing, it’s just an idea.

I just reviewed the Microvision ShowWX+, which mates incredibly easily with an iPad, and can be used to throw an image anywhere, since the projector is so incredibly small and light. But a lot of the time, you’re not going to want to use a projector… so you don’t really want it permanently attached to your tablet, do you? It’s like attaching a crowbar to a screwdriver. Sure, sometimes you want both, but that doesn’t mean they combine the two.