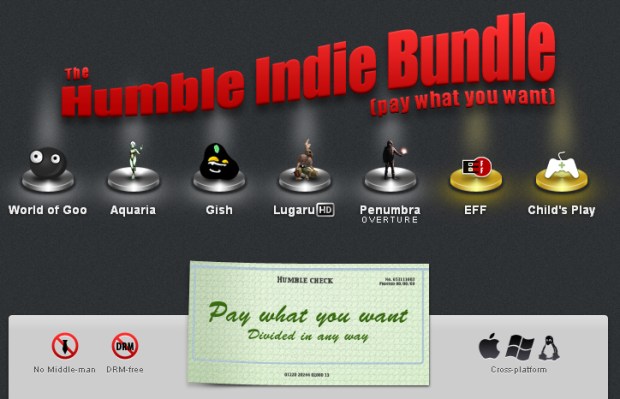 The indie game scene has been blowing up in recent years along with a wealth of blogs and communities surrounding the sub-industry. Even “major” indie games, however, still get overlooked if they don’t have a console release, and as a consequence a number of excellent games get passed up and some really ingenious developers don’t get the compensation they deserve. The pay-what-you want model has proven effective, though — while big publishers aren’t quite willing to buy a game outright or hire the developers, the community is happy to plunk down three or four bucks for a game that would normally sell for twice that.

The just-announced “Humble Indie Bundle” is a particularly star-studded affair, consisting of several high-profile indie games that you’ve probably seen around over the last year. If you’ve resisted buying them at retail or donating to the developers individually, now’s your chance to throw a couple bucks their way, or to charity, and get some really excellent games to play this week.

I played Gish, World of Goo, and the last installment of the Penumbra series (I didn’t get far, it was too scary!), but haven’t tried Aquaria or Lugaru. I’ve seen them both on the Indie gaming blog circuit, though, and I know they come as highly recommended as the rest. If you buy, keep in mind that Penumbra is a trilogy and you might want to pick up the others. You can see them in action here.

But this isn’t just a plug, or if it is I’m going to hijack it to say that I really expect a lot more of this in the near future. The payment system they’ve got set up is so easy, and the opportunity to give partially to Child’s Play or the EFF so tempting, that I feel that such a thing should (and shall) be far more common. There are donate buttons, obviously, but I think casual web-goers will be reassured by a larger, more official setup like this one (sweetened by the cross-platform and DRM-less nature of the games) and might be more likely to give. 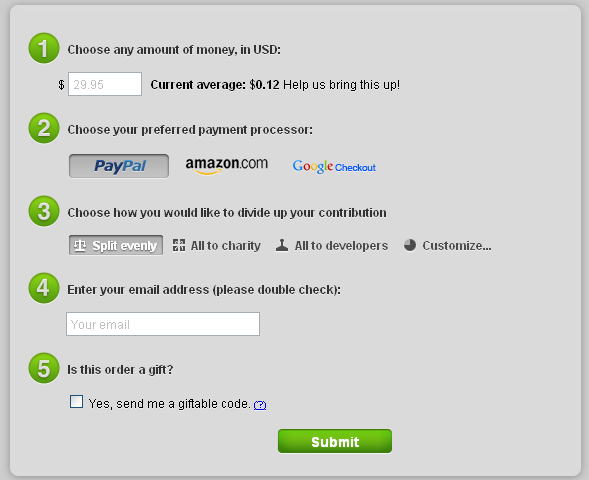 As of this writing they’ve raised over $13000, and it’s only been live for a couple hours. Average donation is nearly $8, which is around what I would have guessed.

I hope to see more stuff like that soon. In the meantime, help support the indie gaming community and pick this package up. If you’re looking for more games like this (free and otherwise), The Independent Gaming Source and Indie Games are my go-to sources for all that.