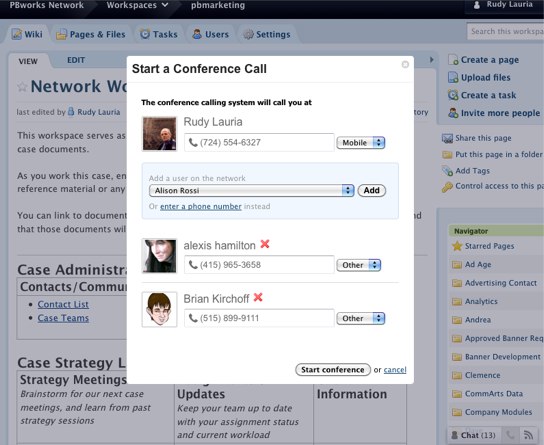 Startup PBWorks, which was formerly known as PBwiki, specializes in helping businesses, non-profits, and educational institutions collaborate via wikis. The startup has been steadily adding real-time features to its platform over the past year, most recently integrating Twitter-like microblogging, tapping into the real-time stream and adding a template store. Today, PBworks is adding another collaborative feature: PBVoice, which is click-to-call conferencing from within the platform.

The platform, which received, an overhaul of its user interface and features last year, offers businesses a project management application and a customized wiki workspace, with mobile support, document management, access controls and more. Now, users can make a conference call from within the platform by simply clicking the names of the desired participants. Unlike most conferencing calls, there’s no dial-in number; PBVoice will call all the participants. Users can add new participants at any time, and each conference call is recorded and stored for later use and review. You can also send the recording of the call to any participants.

The beauty of the integration is that the conference calling feature is an extension of the collaboration platform. Users can call anyone with a single click who already has a PBworks profile or manually dial in any number. PBworks Voice runs on the open source FreeSWITCH telephony platform and phone systems are hosted in PBworks’ own datacenter.

For now calling is limited to the U.S. and Canada but the startup plans to enable international calls in the future. PBworks is launching a free beta period of the service today which is capped at 200 minutes for the next month. When the beta finishes, all PBworks paid subscriptions will automatically come with 200 minutes per month. For nationwide calls, 300 min per user per month will cost $5 per user. 2000 minutes for nationwide calling will amount to $20 per user per month.

Currently, PBworks manages 1 million hosted workspaces with over 3 million active users and has accumulated a loyal client base. The company serves teams from many of the Fortune 500, and was home to three presidential campaigns, the United Nations, The Financial Times and Harvard University. Like Salesforce, PBworks is a paid subscription service, with no advertising. The company has raised nearly $2.5 million in funding, with its most recent funding round of $2.1 million announced in 2007. Competitors include Microsoft Sharepoint, Jive, and Socialtext.