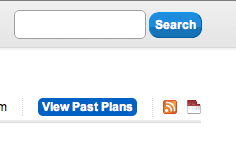 Back in November, we wrote about the launch of Plancast, a new service by TechCrunch alum Mark Hendrickson that’s perhaps best described as “Foursquare for the future.” Since that time, the service has gotten much more useful as it now has a bunch of active users. And with things stable, the team is ready to roll out three of the most requested new features: User tagging, Facebook event importing, and search.

Search is the most obvious addition. You can now search the entire service for not only events, but also for users simply by running a query in the new search box that resides in the upper right hand side of the top bar. Searches run fast, and Plancast smartly breaks up results into “Users” and “Plans.” For example, if you search for “Mark,” you’ll see a list of all the Marks using the site, as well as the few plans with “Mark” in the title or description. Searches can also work by location too. If you search for “San Francisco,” you’ll see all the plans taking place in this city. But it’s worth noting the search currently only works for upcoming plans, not one that have taken place in the past.

From a technical perspective, Plancast search is using Sphinx, an open-source engine that’s one of the most popular among PHP developers, Hendrickson tells us.

User tagging is another new feature that adds a useful element to the service. When you set up a new plan now, you can tag another Plancast user in it. For example, if you filled out that you were going to a bar with “+parislemon” (my username on the site), I would be automatically added as a guest of your event. My user name would also be hyperlinked in the title so anyone could click on it to see my profile. Naturally, there are some people who could abuse such a feature, but Hendrickson notes that you can turn off this tagging in the settings.

There are also two separate syntaxes you can use for people tagging. The aforementioned “+” parameter adds a user to an event. But if you use the “@” symbol, made popular by Twitter, it will simply bring the event to that person’s attention and won’t automatically add them as being a part of the event. This is a pretty clever way of notifying someone about an event without presuming that they’re going with you. In the future, Plancast wants to extend this tagging beyond site users to be able to link these tags to users on Twitter and Facebook as well. Since the service is tightly integrated with both of them, that makes sense. 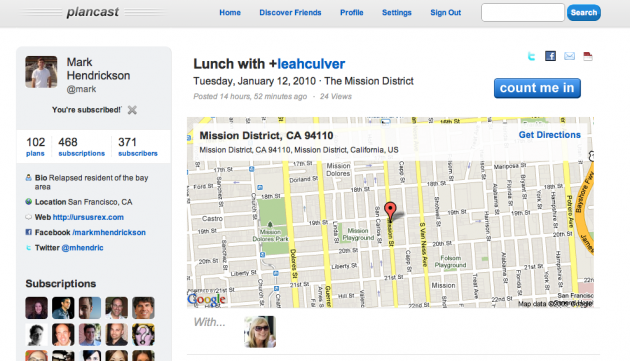 Speaking of Facebook, the third new feature may be the most useful one to help Plancast grow. Plancast now supporting the importing of Facebook events. Anytime you RSVP to an open event on Facebook, and have your Facebook account linked to your Plancast account, it will automatically import it along with any details present. This importing functionality is even able to add other Plancast users who have also RSVPed to the event in the “With” area of the event. These imported plans then link back to the original Facebook event page.

And while it may be slightly controversial, Plancast is turning the feature on for users by default. The thinking here is that it will help new users get into the site because they’ll already have some plans from Facebook imported that they can play around with on Plancast, Hendrickson notes. And you can opt-out in the settings, if you choose to.

There’s another upside to this Facebook importing. Currently, the most annoying aspect of Plancast is duplicate events. This is a problem that many sites face since users don’t realize that someone else has already added the same event that they’re adding. Hendrickson notes that their working on a solution for this, but Facebook imports should actually help because they run queries based on the Facebook event unique URL to make sure it hasn’t been imported into the system before. If it has, they simply add that person to the already existing Plancast event. 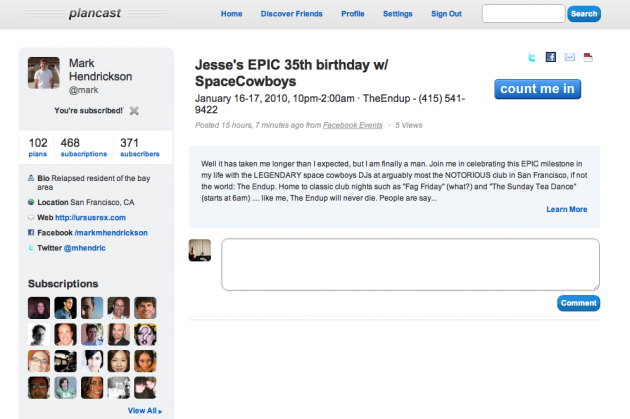 There are a few other smaller updates Plancast has rolled out with the big boys. They include password recovery, the ability to block other users (so they can’t subscribe or mention you), the collapsing of “ongoing” events on the main page, and the ability to put URL in plan titles. Hendrickson also notes that Plancast has started using a “No SQL” solution for some of their data. More tech-savvy readers may recognize that is also a solution FriendFeed is using on their backend, as Facebook’s Bret Taylor wrote about at length here. Plancast has open-sourced their version of this.