If you’re going to leave your job at TechCrunch, you better have a good reason. I think Mark Hendrickson actually may have had one.

Hendrickson left TechCrunch in March. After about two years of writing and doing development for TC, he got the startup itch. He formed a company, Worldly Developments, and along with co-founder Jay Marcyes is now ready to unveil their project: Plancast.

As you can derive from the name, Plancast is a way to easily broadcast your plans to your online social circle. But a better way to think about it may be as a “Foursquare for the future,” which is how Hendrickson often describes it. The main idea is that while many people use Foursquare and similar location-based services like Gowalla and Loopt to share where they are, Plancast is about sharing where they will be.

Here’s a perfect example: On my main Plancast page right now, I see that Hendrickson, another former TC writer Nick Gonzalez, and current TCer Jason Kincaid are all going to spend the night in the woods together in early December. I don’t know why they’re doing it, but they’re broadcasting that they’re doing it. That’s something that you really need to plan a little bit for, so if I wanted to join (I would if there was a hotel nearby that I could stay in), I could do so and let them know with the click of a button. 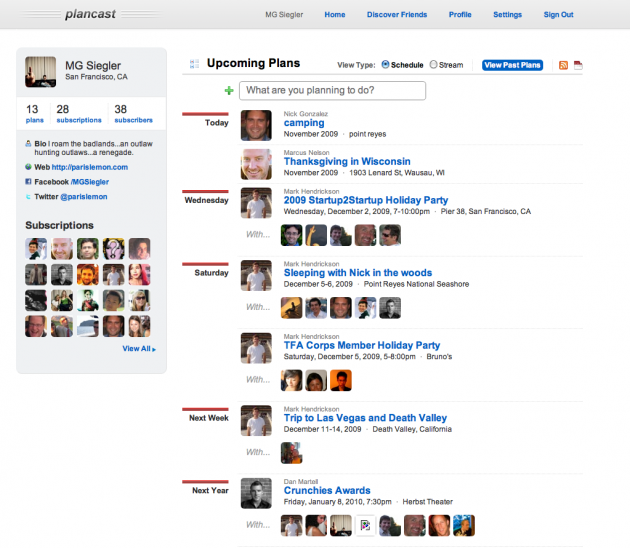 But it’s not just about events that you need to plan for. In fact, it’s not really supposed to be about events. “We shy away from using the term “events” because we don’t feel it’s very appropriate for the scope of activity we’re trying to capture. While our users may be interested in posting more formal, organized parties and whatnot to Plancast (and we certainly encourage them to), we want them to also feel completely comfortable sharing more informal plans (getting drinks, seeing a movie, going to the zoo, traveling to new york for a week, attending a conference, etc),” Hendrickson tells us.

He goes on to note that there’s a real void in that particular area, and I agree. While services like Upcoming and Going allow you to broadcast future things you’ll be doing, they are very event-centric. If you’re just going to get a drink tomorrow night and want friends to join, it seems like overkill to create an Upcoming event for that, for example.

Likewise, Facebook and Evite allow you to make future plans, but both are still pretty formal and are based around the idea of the RSVP. With Plancast, you simply click on a friend’s event and if you want to tag along, you hit the “count me in” button, and you’re set. You can also comment on events, to get more information or share your thoughts on it. 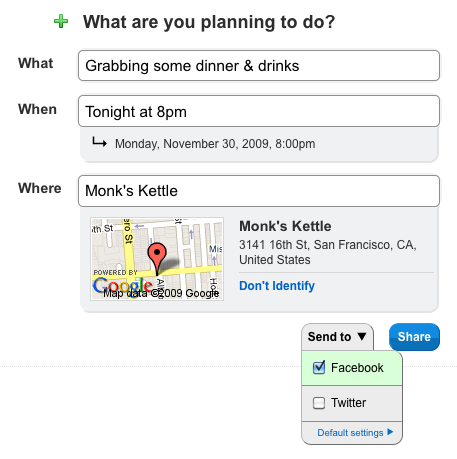 The social graph of Plancast is also very simple. While you can sign up for a new Plancast account from scratch, they emphasize the idea of using with Facebook Connect or Twitter to sign-in and create an account. When you choose either of those, it’s easy to link up the other one (if you use both), to make for wide-ranging social graph. And that’s an important aspect to Plancast, the ability to broadcast these plans out. Once you add yourself to an event, it’s as simple as clicking on button to share it on Twitter or Facebook to let others know about it.

And the event creation process is extremely simple. Along the top of the Plancast page (above your friends’ stream) is an input box asking “What are you planning to do?” Clicking in this box reveals fields to enter the “what,” “when,” and “where” of the plan. The “when” and “where” fields are particular useful because upon entering something it will automatically look up both a date and a place that it assumes you meant. This helps avoid confusion — with the place in particular, as it uses Google Maps to show it on a map.

Going forward, mobile will be a key part of the service, Hendrickson says. He notes that they’re thinking about doing an iPhone app that can do things like alert you when you’re in the vicinity of a plan currently taking place or one that will be in the near future. He says that they’re also thinking about integrating Foursquare’s new API to create a service that offers the best of both worlds — what your friends are doing now and in the future. (It’s important to note, by the way, that while it may be described as ‘Foursquare for the future,’ Plancast has no gaming element…yet. Hendrickson is also thinking about that.)

Likewise, Plancast wants to integrate with the some of the calendaring services to make it easy for people to use no matter your planner of choice. Facebook Events will be a key part of this, as will Google Calendar (which recently started testing a more social element of its own). And there is a plan for an Plancast API so other services can import and use their data. 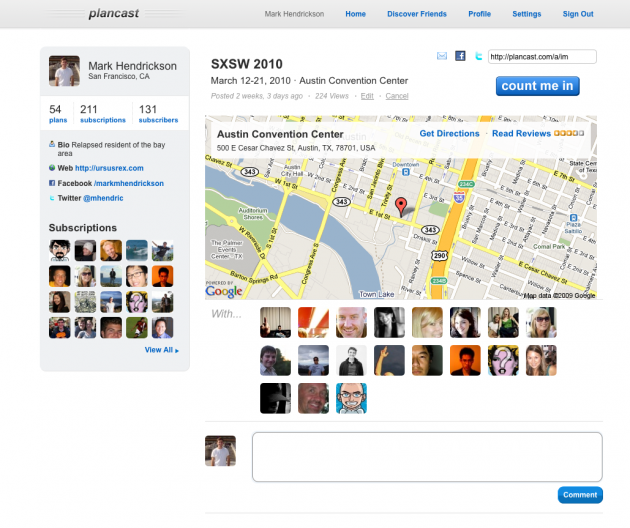 The Facebook integration is key for Plancast. The service was borne out of Facebook’s fbFund ’09 initial winners (its codename was Magellen at that point), and they’ve received a micro-seed round from that so far. The next step is to raise a proper seed round, Hendrickson says.

So how does Plancast build a business out of this? Hendrickson notes that they’ve already begun talking to venues about how Plancast could benefit them, such as getting people to organize events at certain places. The venues themselves may also be able to post Plancasts when they have specials coming up on a certain night, for example. This is similar to what Foursquare is thinking about, but again, for the future.

Currently, all plans shared on Plancast are public, but soon they will roll out a feature to allow you to share certain plans just with select friends, we’re told. There is also a plan to have friend groups/lists to futher make it easier to share plans with only certain people.

I’ve been using Plancast for several weeks now, and it’s a solid service and idea. Hendrickson and Marcyes have managed to keep it simple (which I appreciate) while adding functionality that differentiates it from competitors. The trick will be convincing people that they need to use yet another information sharing service in their life. But if I’m say, going to happy hour tomorrow and want to share information such as exact location, and time without going over 140 characters, while seeing who else is interested, this is a great solution. I do think this fills a need.