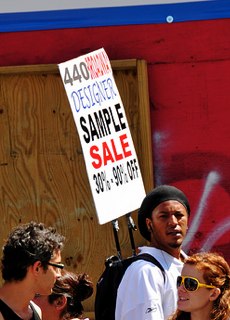 Sample sales are an amazing resource for marked down goods for both mainstream and luxury brands. Online private sample sales are picking up serious speed. Here is how they work: big designers, such as Marc Jacobs or Versace, place excess inventory on a sale site at 50 to 70 percent discounts over a several day period. The sales are private, available only to members, with upcoming sales from brands announced via emails. Products include clothing for men, women and children as well as jewelry, handbags and home accessories. You can get invites from other members or request invites via the site.

Startups in the online sample sales space like Gilt Groupe, Ideeli and Hautelook are all raising huge amounts of money, growing their user base at a rapid pace and turning a strong profit. The concept has even attracted retail giants like Saks and Neiman Marcus, which are now jumping on the bandwagon to offer their own private sales. Even GSI Commerce, which previously wasn’t directly involved with selling luxury goods, is getting into the private sale business with the recent acquisition of sale site RueLaLa.

It’s worth noting how sample sales have evolved in the past decade. I attended my first sample sale in 1997 in a convention center in Baltimore, where women (and a few men) were scouring for deals on clothing from J.Crew. The items were placed in huge cardboard boxes in no particular order or size breakdown. It was utter chaos, but the deals were great.

Flash forward four years to my shopping life in New York City, where sample sales are a bit of a religion. At Kate Spade, I fought intense lines (waited in an hour long line in the middle of December, nearly got frostbite in my toes), pushed my way into packed fitting rooms, and found myself intimidated by the catiness of aggressive deal-seekers. At Gucci, I was asked to sign up for an hour-long “window” of shopping time. Only all the convenient times were already taken, and I was left with times in the middle of a workday. And yet I walked away from both sales with steeply-discounted designer stuff that I wouldn’t ordinary be able to afford.

You get the point. Sample sales offer great deals, but highly uncomfortable situations. Gilt and other online private sales are simplifying the sample sale market. The online sample sale was originally brought to market in Europe by Vente-Privee in 2001. US companies like Gilt, Hautelook, Ideeli and BillionDollarBabes emerged a few years later with a similar online model, offering users radical discounts on overstock goods from designers.

Sample sales are also proving to be a compelling market opportunity. Vente-Privee itself is on target to achieve €650 million in turnover globally this year. The price (in a possible sale) for Vente-Privee is estimated at $1.5 billion, with some sources even putting the figure at between $2 billion and $4 billion. The New York Times reports that Gilt Groupe, co-founded in late 2007 by a former eBay executive and, was able to bring in $25 million in it’s first year of operation. Gilt currently has 1.6 million members. And the startup recently raised an estimated $40 million in funding in July, which valued the company at $400 million. Ideeli, which was founded in November of 2007 and now has over one million members, is set to do $50 million in revenue this year, and the company’s CEO, Paul Hurley, expects to do $175 million in revenue next year.

So why is this model successful? Well, in addition to the fact that women and men can now avoid the chaos of the in-person sample sales, the sales are now brought to the masses. So it’s no longer shoppers in New York City who can solely benefit from the steep discounts, but consumers all over the world now have access to these goods. And because the sale only takes place in short amount of time, with limited stock available, shoppers feel the urgency to actually buy the product, because it may not be available within a few hours.

Most brands are also on board with the model. Since the sample sale site presents the brand in a luxurious, desirable way, via a “private” sale, designers don’t feel that these online sales are distorting the value of their brand in any way. So Gilt can get a premier designers like Marc Jacobs to sell his coveted handbags on its site for half the price. Plus, adds Hurley, the time frame of the sale ensures designers that their clothing or accessories aren’t just sitting in a bin somewhere. Hautelook even gives designers a real-time metrics dashboard that allows them to see what items are being bought, what parts of country where specific items are selling best and more.

As I noted earlier, the success of this model has now led to a number of retail shops and other technology companies sniffing around to either acquire or build private shopping sales of their own. Yesterday, DailyCandy released the news of their private shopping club and even designers themselves, like Tory Burch, are holding few-day private sales online. And as we reported earlier in the month, we hear that Gilt, Amazon and eBay are all actively looking at acquisitions in the European private shopping club space.

Online sample sites are drawing massive audiences, and monetizing them in a meaningful way. Of course, it’s a competitive space with every site duking it out for supply (the designer inventory) and demand (the buyers). And yet, even in recessionary times, the sample sales market seems large enough to sustain a market of startups, and keeps me looking like TechCrunch pays me a decent salary (joke!).