A lot of hopes are being pinned on video search these days as the only remaining source of strong advertising growth. One of the few publicly traded pure-play Web video companies is blinkx, which trades on the London stock exchange, and just announced its half-year earnings for the fiscal year ended September 30, 2008. The company’s revenues rose 115 percent to $6.4 million for the six month period (although the comparison is only partial—see income statement below). It’s gross profit doubled from $2.2 million to $4.5 million.

Although blinkx runs its own video search engine, which is showing a nice ramp in visitors, most of the video searches that blinkx powers are on about 20 partner sites such as Ask.com, Lycos, some Microsoft sites, and Viacom’s AddictingClips. Blinkx indexes more than 32 million hours worth of video from 420 content partners, including most recently People.com, CBS, and Getty Images. Its syndicated video search reached 64 million people and accounted for 668 million pageviews in September, according to comScore. Blinkx is serving up 7 million video searches a day across its network. Here are some stats for the past six months from the company:

In addition to powering video search, blinkx also has its own AdHoc video ad network that can place contextual ads in videos triggered by the words spoken in them. The company is ramping up that effort by hiring ad sales people, which is one of the main reasons it is still losing money. It spent $6 million in sales and marketing during the six-month period, nearly as much as it generated in revenues.

A couple weeks ago, blinkx CEO Suranga Chandratillake was on a Beet.TV panel I co-moderated. He speaks towards the end of the video below starting at the 2:45 mark about the speech-to-text technology blinkx uses to index and search the actual spoken content of videos, and how that helps avoid a situation where video creators are gaming the search engines by putting deceptive tags, titles, and descriptions on their videos so they rank higher in search results. 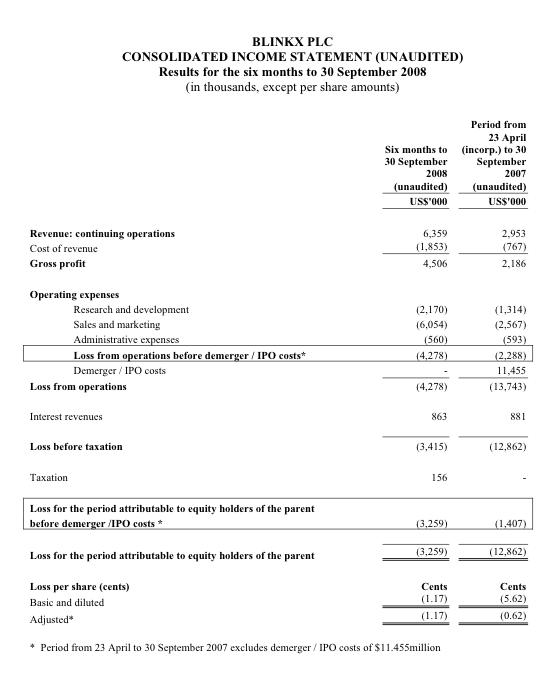