Three years into its life with 2 million paying users signed up, Workplace — Facebook’s platform for businesses and other organizations to build internal communities and communications — is about to make a significant business shift of its own. Come September 2, Workplace is changing its pricing tiers, how it charges its users and the services that it provides customers.

Up to now, Facebook has taken a very simple approach to how it charges for Workplace, unique not just because of it being a paid service (unlike Facebook itself, which is free), but for how it modeled its pricing on the basic building block of Facebook-the-consumer product: a basic version was free, with an enhanced premium edition costing a flat $3 per active user, per month.

In September, that will change. The standard (basic) tier is getting rebranded as Workplace Essential, and will still be free to use. Meanwhile, the premium tier is being renamed Workplace Advanced and getting charged $4 per person, per month. And Facebook is introducing a new tier, Workplace Enterprise, which will be charged at $8 per person, per month, and will come with a new set of services specifically around guaranteed, quicker support and first-look access at new features. (Those who are already customers have the option of being grandfathered for a year, the company said, before switching to a new plan.) 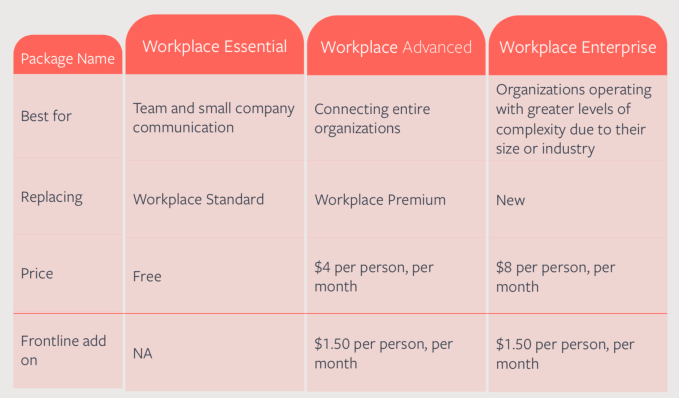 Those are not the only changes. Two other notable shifts are getting introduced with these new tiers. First, these prices will be for all users, regardless of whether they are active in the month.

And second, they are specifically prices for people who access Workplace as general “knowledge workers” — marked by having email addresses and specific job functions. Frontline workers — for example, cashiers or baristas or others mostly on their feet all day helping customers — will be an add-on at $1.50 per person per month, also regardless of whether they are active or not.

For now, the rest of the features in the different tiers are remaining the same.

The changes at Workplace come amid a number of other developments among workforce collaboration and communication platforms.

First and foremost, Slack has gone public, subjecting it and its ups and downs to a lot more public scrutiny, but also putting it on the map as a business of some standing, helping it make a bigger move into brokering more deals with the larger enterprises that Workplace has been winning over. The latter’s customers include the likes of Walmart, the world’s biggest employer; as well as Nestlé, Vodafone, GSK, Telefonica, AstraZeneca and Delta Airlines, and Facebook says there are more than 150 companies signed up with more than 10,000 employees each.

Teams, meanwhile, has now passed Slack in user numbers, and in a way is a more direct competitor: it has positioned itself (like Workplace) as a tool for both knowledge and frontline workers, helping with actual back-office collaboration, as well as a way to broadcast communications to a wider group of employees.

Julien Codorniou, the VP of Workplace, said the changes in pricing tiers was not a reaction to competition, but rather a reaction to customers. Although the pricing for Workplace was an interesting twist on how enterprises tend to procure IT, it turned out to be too novel by half: it turned out that most actually like the predictability of paying the same amount for a service upfront, rather than having the pricing change each month depending on usage.

“Today, customers’ bills change every month, for example when a co-worker goes on vacation or whatever,” he said. “It’s a nightmare for the accounting department, who needs to know how much to pay two years out.”

He added that this doesn’t mean you can’t change how much you pay: you could change the pricing each month if necessary.

So far, no one has made the shift to the new tiers, so it will be interesting to see how and if they have much of an impact. I do know that from retail theory, customers in stores are more likely to select a middle-priced product if they are given an option of something cheap and something expensive at either end, and so this could be an interesting way to drive more users to Workplace’s paid tier.

What is more clear is that this is also a way for Facebook to raise its prices for the first time since the service launched, and lays the groundwork for more differentiation between different kinds of offerings.