Teams, Microsoft’s two-year-old Slack competitor, is the company’s fastest-growing application in its history. That’s something Microsoft has said in the past, but for the first time, Microsoft today also announced actual user numbers for the service ahead of its Inspire partner conference next week. Teams now has 13 million active daily users, Microsoft said, and 19 million weekly active users. Microsoft also today said that Teams is now in use by 91 of the Fortune 100 companies.

The company isn’t afraid of putting those numbers up against Slack, which IPOed only a few weeks ago. Jared Spataro, Microsoft Corporate VP for Microsoft 365, doesn’t mention Slack by name in his blog post, but the company put together a little graphic that clearly shows why it is now willing to share these numbers.

The last official number from Slack is that it had 10 million daily active users in January. Without update numbers from Slack, it’s hard to say if Teams now has more users, but unless Slack’s growth accelerated in recent months, that’s probably the case. 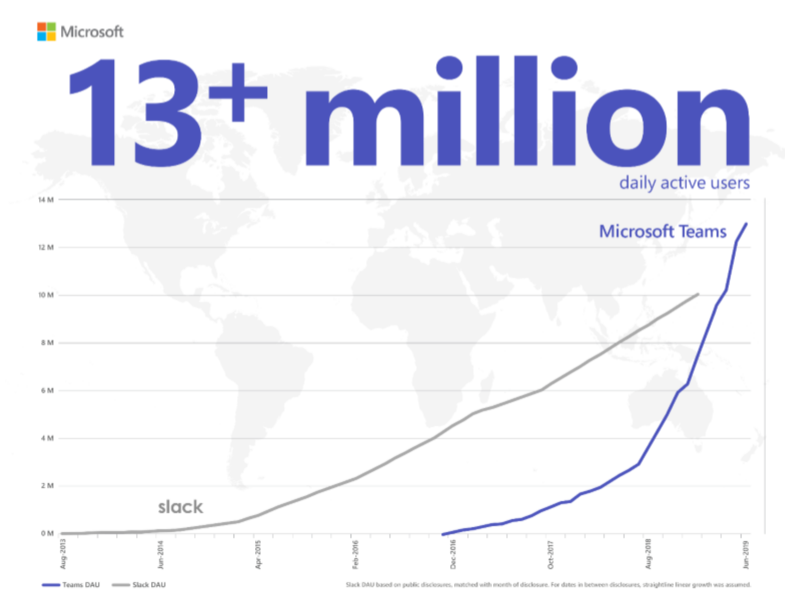 In addition to disclosing these numbers, Microsoft also announced a number of updates to Teams that range from features like priority notifications, which take the annoyance of chat notifications to a new level by pinging you every two minutes until you respond, to read receipts, new moderation and cross-posting options for Teams channels and a time clock feature that lets employees clock in and out of work shifts right from the Teams mobile apps.

Because Inspire is an event for Microsoft partners, it doesn’t come as a surprise that Microsoft is also launching a few new Teams features that involve its resellers and other partners. These include the ability to integrate teams with compliance recording partners like ASC, NICE and Verint Verba, as well as a contact center solution in partnership with Five9, Nice InContact and others. The most important of these announcements, though, is surely the fact that Microsoft is launching a new partner-led Teams trial (PDF) that will enable Microsoft 365 partners to offer a free six-month trial of Teams to customers on the Exchange-only or Office 365 Business plan. This will surely bolster Microsoft’s user numbers for Teams in the coming months, too.