“This on-demand, or so-called ‘gig economy’, is creating exciting opportunities and unleashing innovation. But it’s also raising hard questions about workplace protections and what a good job will look like in the future” Presidential candidate Hillary Clinton said in a speech today outlining her economic policy. You can rewatch the talk on C-Span here.

Clinton was referring to companies like Uber that are built on armies of independent contractors. She prefaced the statement noting that the country and Wall Street are thinking too much about short-term financial returns. She said “Meanwhile, many Americans are making extra money renting out a spare room, designing websites, selling products they design themselves at home, or even driving their own car.” 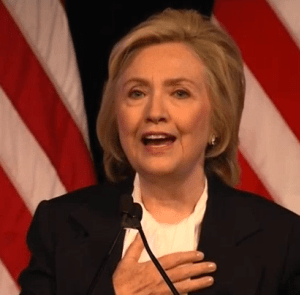 While these workers get scheduling flexibility and the freedom to do other jobs, they don’t get benefits and may not have the same long-term career opportunities. Some prefer being their own boss, but some want the extra protection of full-time positions. There may be an opportunity for policies that give workers themselves the choice.

At the talk at The New School in Manhattan, Clinton laid out her plan to strengthen wages and build up the middle class. Her stance on contract workers came as part of her push to foster good paying jobs. That’s one part of her three-pronged strategy that also includes balancing out inequality and a focus on long-term over short-term thinking for businesses.

Clinton accused some employers of “wage theft” through the way they treat contractors. She says “I’ll crack down on bosses who exploit employees by misclassifying them as contractors or even steal their wages.” Clinton cited “Fair pay and fair scheduling, paid family leave and earned sick days, child care are essential to our competitiveness and growth.” These are the workplace protections that contractors lack.

However, her camp tells me Clinton sees this issue as having arisen well before the on-demand economy, and she views a crack down of enforcement as a distinct issue. Specifically, her campaign says that Clinton has not made a definitive statement about how Uber drivers should be classified, and I was told not to expect one soon. Instead, Clinton is thinking strategically about how to develop policies that protect all types of workers but that are relevant to the future and don’t stifle innovation. 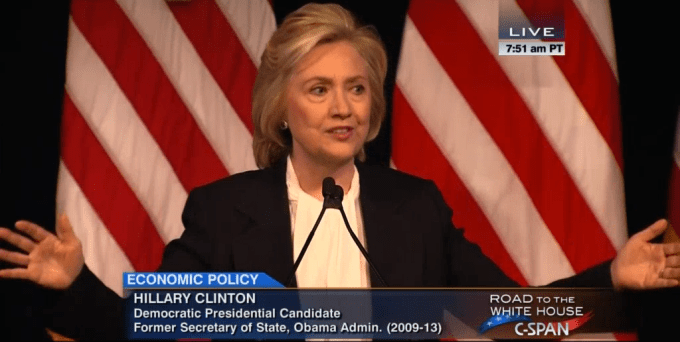 Also relevant to the tech sector, Clinton denounced quarterly capitalism. Speaking on behalf of business leaders she’s spoken to, Clinton said “They say everything’s focused on the next earnings report or the short-term share price. The result is too little attention on the sources of long-term growth: research and development, physical capital, and talent.

“Some of our biggest companies have spent almost half their earnings to buy back their own stock, and another third or more to pay dividends. That doesn’t leave a lot left to raise pay or invest in the workers or make new investments to ensure a company’s future success” Clinton said. “These trends need to change.”

The question now is what concrete changes Clinton would like to see regarding contractor classifications, workplace protections, and reporting requirements for public companies to build what she calls “a growth and fairness economy.”