Internet connection and automation service IFTTT, which joins the dots between different Internet services and mobile OS components to create recipes to do things automatically for you, is awesome-sauce for the tech savvy.

But for those who might not be quite so comfortable putting in place a sequence of digital acrobatics that improves their existence on the fly here’s a hardware alternative, called bttn, which aims to make a particular digital recipe available to anyone at the push of a physical button.

bttn, which is launching today on pre-order (for €69), is a physical, Internet-connected button (aka the bttn) that can be pressed in order to trigger a particular action. The bttn talks to Finnish startup The Button Corporation’s servers via SMS, cellular data or Wi-Fi to execute the pre-set command, and is battery or micro USB-cable powered. The pre-set command can be customised via a browser.

What exactly can be customised via bttn?

The server offers you various configurable actions to trigger upon pressing of the bttn. Using a simple wizard, you can harness the power of various Internet technologies, such as HTTP, RSS, IFTTT, SmartThings, Twitter, Facebook, email, or SMS messaging. And we’re building more choices all the time.

Examples of the sorts of scenarios where bttn could be used include as a way for a child to quickly send an SMS to their parents to say they’ve arrived home (rather than, say, sending a template from their own phone). Or for an elderly person to push to sent an SMS alert to a relative if they are feeling unwell, or — conversely — to say they are doing OK.

The button pusher receives feedback on whether the command has been executed — currently this is visual feedback, via LEDs incorporated into the bttn. Green for ‘command executed’, yellow for ‘wait’, red for ‘error’.

bttn’s lights can also be used as a cue to prompt the bttn owner to press the button. For example by pulsing slowly to draw attention and flashing more rapidly if the bttn is still being ignored. An alarm can then be sent if the bttn is not pushed within a specific time window.

That functionality might be a useful at-home reminder to someone take medicine at a particular time, or as a way to check an elderly person is ok — the latter use-case being one of the triggers for bttn’s founder, Harri Rautio, to come up with the idea. 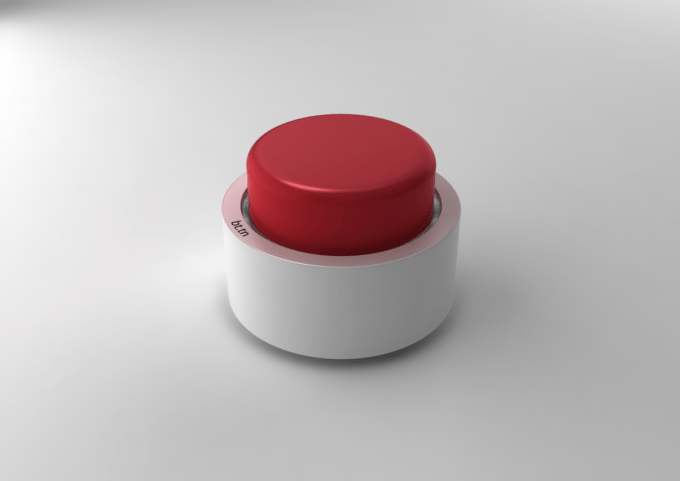 Beyond the current coloured lights, the startup says it’s also exploring adding voice as a way for bttn pushers to receive feedback, and also even for sending commands.

For IFTTT addicts, bttn’s makers reckon it could also be a complementary offering that takes even more friction away — but specifically from the physical sphere of their daily lives, at those rare times they’re not tethered to a computer (pocket-sized or otherwise).

Discussing the competitive landscape, a bttn spokesman told TechCrunch: “We are competing against a number of legacy providers who offer single-purpose devices built on legacy infrastructure. These players are largely local.

“In some sense, you could say we compete with IFTTT and the like but we see those offerings more as complementary than competing with us. There are also a number of ‘virtual button’ providers (i.e. apps providing a similar service).”

“Our key advantages include: extreme simplicity of use, flexibility, low cost, and the ability to offer partner-branded devices and services,” he added.

The startup sees the b2b market as having the largest potential for bttn — despite an initial launch offering the bttn to early tech adopters for a one-off fee.

Indeed, it’s signed up Finnish taxi and minibus service provider Kajon Oy to provide bttns for repeat ordering of rides in locations such as restaurants, hotels and other businesses frequented by large numbers of customers (ie instead of having to phone the cab firm up every time, the business will be able to push a button to order a ride to a specific address).

It’s also signed up local Finnkino movie theatres to install bttn as an in-theatre call button for cinemagoers to summon help when needed as a way to boost customer service.

The startup, which was founded in September 2013, says it has been working with several customers and a group of beta users since early this year. On the funding front, it’s raised money from Jari Ovaskainen (the first investor in SuperCell) and from Finnish government funding agency for technology companies, Tekes. Total funding stands at sub-€1 million thus far.

The business model for a b2b-focused bttn will be monthly fees — something that corporate partners are more likely to be happy to pay for than private users. But early bttn adopters can snag the device without the monthly fee. Those who pre-order the device now can expect it to ship in October.