How many times have you stepped out of the group to click pictures, feeling left out as others posed? Or have there been instances when you’re jostling to get back for a group picture after setting the timer of a camera shutter? While there is Samsung NX Mini, which comes with an LCD screen that flips 180 degrees for taking selfies, it still requires users to make adjustments in the frame. Ditto for camera-fitted mobile phones that need a lot of work in getting that perfect selfie.

GlobalDelight, an iOS app developer based in the Indian coastal town of Udupi, is today going live with an upgrade of its Camera Plus app, loaded with a new feature called AirSnap that helps users capture photos and videos remotely by pairing two iOS 7 devices  (using Bluetooth or wi-fi) like iPhones, iPads or iPod Touches. Both the iOS 7 devices need to be loaded with Camera Plus app, which converts one of the devices into a remote trigger and the other one for capturing images, videos.

I am not a big selfie fan, but while trying out the app it became clear that AirSnap allows much more than just clicking selfies. I paired my iPad with iPhone and used one of them to capture emotions of my 3-year old daughter opening a gift-wrapped doll some 20 feet away. I connected the two devices through Bluetooth, which assigned iPad as the device for capturing images and converted my iPhone 5 into a remote shutter.

AirSnap allows users to control flash, switch between camera modes, see instant previews on the trigger device and select front and rear cameras. All these features make it so much easier to manage group photos where no one wants to be left out.

“We’re also looking into ways of saving those captures to the trigger device and/or to all the other members who are part of the capture,” said Robosoft founder Rohith Bhat.

Among features I liked while playing around with the app was the customized experience it offered for different iOS devices. For instance, AirSnap has a customized floating capture bar for Camera Plus on the iPad so that users don’t end up straining their fingers while reaching for the capture button. 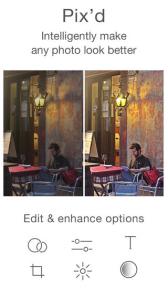 There are some standard features too that help enhance the quality of images and videos. Pix’d is a feature for instance that fixes color, skin tones.

As part of the new release, Camera Plus 3.5 has also been upgraded with several cool features. A “Soft Flash” for iPads helps brighten images along with a 720p video capture option. AirDrop sharing and the ability to pause and resume video recording on-the-go are among other cool additions. 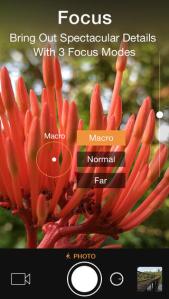 The latest release of Camera Plus also makes it easier to focus and hunt down that perfect shot. Along with “Lumy”, a slider feature on the screen that analyses prevailing light conditions and adjusts brightness accordingly, the photos should get clearer too.

Apple has recently been granted patent for a wireless iPhone camera remote control, underscoring how the company is moving into the wearable computing era. AirSnap kind of follows that trail too.

“Apple seems to be bracing itself for the introduction of wearables era. It looks like an external device that can control and trigger photos and videos remotely. We just hope they open up their API’s so that Camera Plus can leverage it,” said Guruprasad Kamath of GlobalDelight. AirSnap marks an evolution for the most popular app developed to date by GlobalDelight — Camera Plus. The app has seen close to 25 million downloads and has nearly 9 million active users.

Some of the past features such as the option of storing images and videos in a password-protected “Locked Roll” have been retained, but it comes at an extra cost through in-app upgrade.

GlobalDelight might not be as well known in India as the country’s biggest technology companies such as Infosys and Wipro, but it’s not an alien in the Apple app store. Over six years since it was first established as a subsidiary of Robosoft Technologies, GlobalDelight has launched several apps  such as Game Your Video (3.5 million downloads) and Camera Plus, which has seen close to 25 million downloads to date.

“Going beyond the intuitiveness and beauty of the app, we’ve tried to make it as easy as possible for the user. We’ve brought out simple ways to adjust the exposure and brightness (Lumy) as well as an easy way to take care of image enhancement (Pix’d),” added Rohith.

Robosoft/GlobalDelight is inspiring a whole new breed of entrepreneurs from small towns in India to build software products. Based in Udupi, which is more famous for its temples and local cuisine, a team of 35 engineers have been cooking apps at GlobalDelight since 2008, totaling over 35 million downloads on the Apple App Store to date.

Camera Plus with AirSnap will be available for download starting today on the iTunes App Store for $0.99. If you’re an existing Camera Plus user, the upgrade with AirSnap comes free.