LinkedIn has at last added a long-requested feature with the introduction of member blocking. This adds a new privacy control to the service, which lets you restrict access to your profile, direct interactions, and network activity from any other logged-in member who you don’t want to interact with on LinkedIn.

The company says that it introduced the option not only because of user feedback, but also because “it was the right thing to do.”

While many of us will be grateful for the addition because it means we’ll now have a simple tool to block spammers who clutter our LinkedIn inbox with annoying requests and messages, blocking also has more serious safety and privacy implications, too – such as in the case of users who are victims of stalking or domestic violence, for example.

In an announcement about the change, LinkedIn also noted it has a variety of other tools for users interested in better protecting their privacy, including tools to disconnect from existing connections, tools to control your activity broadcasts, plus profile and photo visibility settings.

LinkedIn suggests that before you block a member, you turn on “anonymous profile viewing” in your settings, so that – should you change your mind, close your browser, have a technical issue, etc. – you won’t leave your name in the “Who’s Viewed Your Profile” section of the would-be-blocked user’s account.

The new blocking feature is available on the drop-down box on a user’s profile, next to the “Send InMail” button. It’s now the last item on the list, which reads “Block or report.” 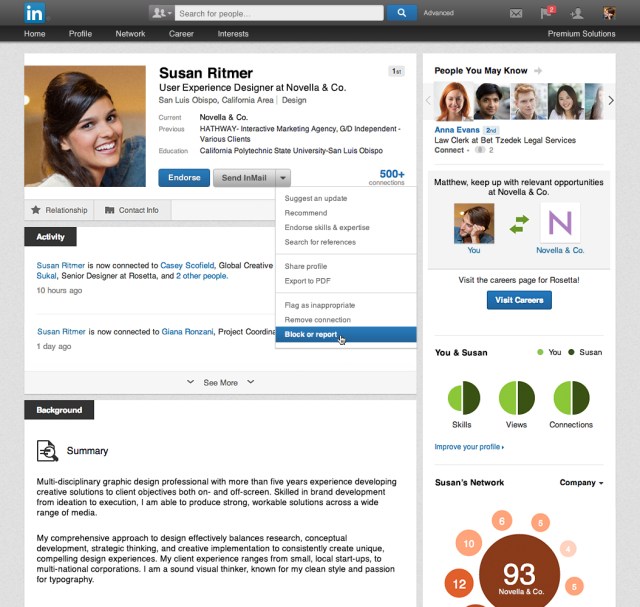 After a user is blocked, you won’t be able to access each other’s profiles, message each other, and if you had been connected before blocking, you won’t be anymore. Any endorsements and recommendations from that member will also be removed from your profile, and neither user will ever be recommended to the other again in the “People You May Know” or “People also Viewed” sections of LinkedIn.

As someone who has mistakenly been perhaps a little too generous in responding to connection requests in years past, the blocking feature is a welcome change. Now, all those “maximize your SEO!” and “buy my stuff!” emails I receive can be met with a swift response.