I’ve had most of the week to wear the $129 Jawbone UP and I thought I’d offer a few impressions for those unsure which model pedometer to buy. I’m a Fitbit man myself because I’ve gotten used to moving the minuscule dongle from pocket to pocket and I have only lost one in my travels. But – and this is a big but – I could be convinced to move over to Jawbone if they fixed a few niggling problems.

The UP, if you’ll recall, is a bracelet that senses your movement. This can be used during the day to see how much you run around and during the evening to see how well you’re sleeping. You can also log your food intake and mood, thereby giving you a fairly good picture of your calorie I/O and general state of being.

It holds a about a week’s charge in a package about as big as a bangle bracelet and there’s a single button to switch from day to night mode. It’s clad in rubber and is waterproof. It also has a silent alarm that will wake you gently from your slumber and a slacker alert that buzzes during a certain interval to remind you to leave your nest of sloth and walk around a little.

What else is different about the new UP? Well, Jawbone completely redesigned the innards, ensuring that no water can get in and that the constant pressure of taking it off and putting it back on wouldn’t break the connectors, chips, or battery. The changes are almost entirely internal but ideally this one will be far more rugged than the previous version.

Now here’s the rub: unlike the $99 Fitbit One and other devices, you sync it by plugging it into your cellphone’s headphone jack. There’s a little cap that covers the jack (which will, at some point, inevitably fall off and be lost) and a USB dongle that you use to charge it with a laptop. You don’t really interact with the UP on a desktop, which works well enough, but I’d love a way to sync wirelessly. Presumably the size of this device – and it’s surprisingly tiny – prevents that from being an option, but it could be a dealbreaker for some. There is, sadly, no external indicator of steps walked so you’re mostly in the dark when it comes to ambulation. 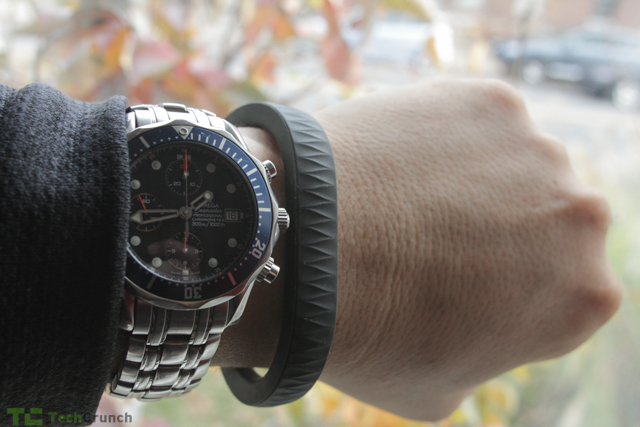 For others, slipping the thing off, popping off the cap, and plugging into a phone isn’t that hard. You don’t have to do it every day (but you’ll want to) and the app is cool enough that you can forgive it some of its drawbacks.

But with so many other devices on the market, why this one? Well, simplicity is a factor. This doesn’t look like a nerd device. It could actually masquerade as a piece of jewelry, provided you’re into rubber. The UP is also quite accurate, matching the Fitbit One almost exactly each time I checked it. In other words, it works.

I also like the reminder feature, which works a bit better than Fitbit’s quiet calm. A buzz on my wrist helps me get up and walk around a bit, which is a great thing.

In the end which is better? I’m not sure. These things are constant reminders of our failure as biological organisms. I do enjoy the UP’s simplicity but the Fitbit, with its stair sensor and comprehensive online interface still keeps me coming back. I’ll wear them both – I’m a dork like that – but I suppose the rule of thumb is simple in this case: if you tend to lose tiny things a lot, buy the UP. Otherwise, weigh the merits – price being one – and see which features you’ll use the most. There is sadly no one clear winner, but the surfeit of choice is great for folks living the quantified life.