Younger users are just as engaged as everyone else, Facebook is selling $1 million in Sponsored Stories ads a day, and building a phone “wouldn’t really make much sense” are a few of the juicy news nuggets dished on on Facebook’s first earnings call today, led by CEO Mark Zuckerberg. Still, Facebook noted it was disappointed in how its stock has traded.

For details on Facebook’s actual earnings, check out our coverage of its revenue and financial progress, and its user growth. But here are the biggest highlights from the earnings call which lay out Facebook’s roadmap for the rest of 2012.

Zuck kicked off the call by saying that Facebook’s platform strategy is “To create the identity and social layer that all new apps can be built on.”

Zuckerberg noted that almost 1 billion pieces of content are shared to Facebook each day from Open Graph. He also explained that when people think about Facebook’s platform they only think about games, but there are lots of other types of apps. Unfortunately, the platform only racked up $192 million in payments revenue, barely above the $186 million it made last quarter. This was partially due to the growth of  Facebook-integrated mobile games for iOS and Android where Facebook doesn’t earn any money. 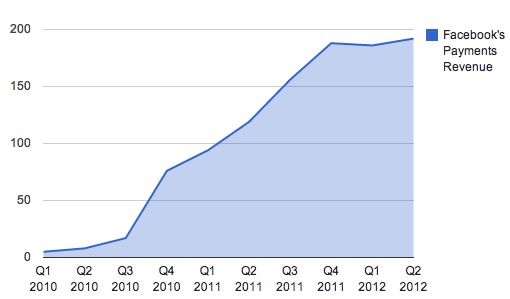 Zuckerberg doesn’t want ads to be strict marketing messages but instead “Interesting content from people you care about” with the goal of  “getting advertisers to add value to people’s experience on Facebook.” COO Sheryl Sandberg said Facebook will compete across the purchase intent funnel, from demand generation to fulfillment. 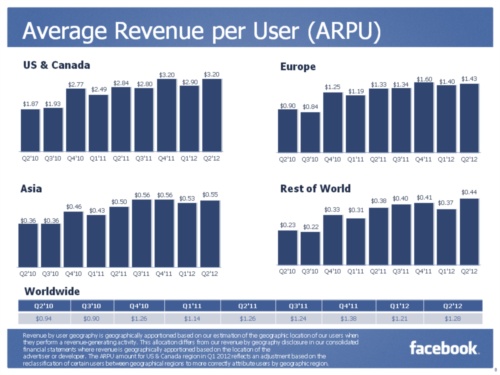 Sandberg explained that “Sponsored stories perform multiple times better than ads in Facebook’s sidebar”, partly because users are more likely to remember recommendations from a friend. Facebook plans to increase the presence of Sponsored Stories in the news feed, meaning a higher frequency of the ads compared to organic content.

Meanwhile, it launched Facebook Exchange (FBX), and says eMarketer claims the real-time bid ad market it addresses is $2 billion a year in the US alone. Sandberg said the goal of the program is to increase the relevance of the ads users see on Facebook.

As proof of return on investment, Sandberg said that Electronic Arts saw over a 4X ROI on its ad spend for the launch of its videogame Battlefield 3. EA told Facebook that $12.1 million in sales came from an ad spend of around $3 million.

Younger Users – When asked if there was a possible decline in usage by younger users, Zuckerberg said there’s been “steady growth and engagement in all the cohorts including younger cohorts.”

The “Facebook Phone” – Zuckerberg essentially denied that Facebook is building its own mobile phone, noting it would rather get baked into the leading mobile operating systems. “We want to not just have apps that people use but also be as deeply integrated into these systems [iOS and Android] as possible….as opposed to building out a whole phone, which wouldn’t really make much sense for us here.”

Company Headcount – Regarding Facebook’s thoughts on the its small headcount, Zuck said Facebook has always been smaller than other companies, and that is a reason people like working there, and that it’s helpful in strategy. He noted that Facebook wants to make every app social, but can’t build them all in house. Zuckerberg said “Over time it might make sense to build more of these things ourselves.” 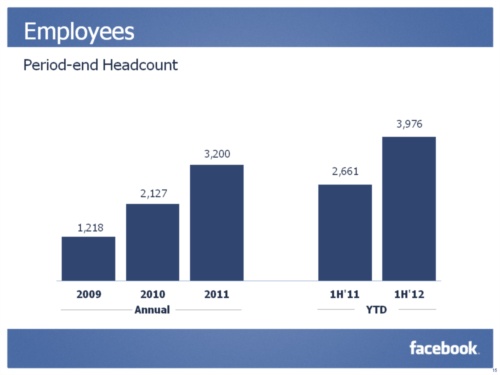 Social Ads – On Sponsored Stories, Facebook’s leaders noted its selling $1 million worth of the social ad unit per day, and half of that spend is buying ads on mobile.

CFO David Ebersman reminded analysis that currently “A very small percentage” of ads are Sponsored Stories, indicating there’s a lot of runway for Facebook to make more money from those ads over time. However, Ebersman noted that “We’re being very careful about the volume of sponsored stories in the news feed because it’s so core to the user experience.” Sandberg also said the ad product hasn’t rolled out in many countries outside the US.

Regarding volume, Sandberg elaborated that Facebook is “looking at two things – social context to make sure [sponsored stories are really relevant].” It’s also looking at user reactions. “It’s easy for us to measure if users are sharing, clicking, liking, commenting” and comparing those metrics to other ads to determine whether or not users find them intrusive and detrimental.

Local Businesses – On Facebook’s focus on local businesses, Sandberg said  “Local is huge, it’s the holy grail of the Internet. The problem with local businesses is that they’re  not very tech savvy. Something like 40% of them have no web presence at all.” However, because Facebook is so ubiquitous as a consumer product, that lack of online experience could give Facebook a leg up over competitors.

Sandberg explained, “We have  an advantage because [local businesses are] using Facebook as users.  They start to see messages from other businessesand they say ‘wow, this could work for my business as well.'” She cited that 7 million businesses use their Pages for marketing on a monthly basis, and hundreds of thousands get upselled into becoming advertisers. Facebook is making that even easier with its Promoted Posts product  (covered by Inside Facebook) which lets Pages pay a few dollars to have their posts reach more of their fans. 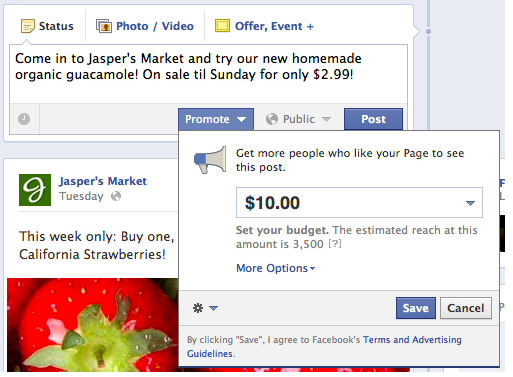 Facebook’s Partnership With Yahoo – Sandberg detailed the two parts of Facebook’s new partnership with Yahoo following a heated patent lawsuit battle: “The first part was a cross license of all the patents”. The second part includes that Facebook will “work with Yahoo on tent pole anchor events such as the Olympics. This confirms my report that Facebook and Yahoo did a full portfolio cross license, not that “the deal encompasses licensing of a little more than half of Yahoo’s rich portfolio of digital patents” as reported elsewhere.

Sandberg followed “I think we’d also like to take the opportunity to congratulate Marissa on her new job at Yahoo”, in regards to former Google leader Marissa Mayer becoming Yahoo’s new CEO. Mayer tweeted with gratitude:

Thanks for the shout out, @sherylsandberg – very excited to be here at @Yahoo!

Instagram and Acquisitions – When asked if Facebook and Instagram were integrating, Zuckerberg was quick announce ” “The acquisition hasn’t closed, so no integration at all yet. There will be an update when that happens.” Facebook will continue hiring away startup founders in the meantime. Zuckerberg said “Our strategy has been primarily to buy companies for talent. We want the kind of people who want to build out their own companies. Outside of Instagram that’s been our strategy and will be our strategy moving forward.”

Check out the rest of TechCrunch’s coverage of Facebook’s first earnings report:

The 40 Most Important News Stories About Facebook Since Its IPO

Zuckerberg On Instagram: There’s Been No Integration, The Acquisition Hasn’t Closed

Zuck On Facebook’s Mobile Experience: It Gets Better (But We Probably Won’t Make Our Own Phone)