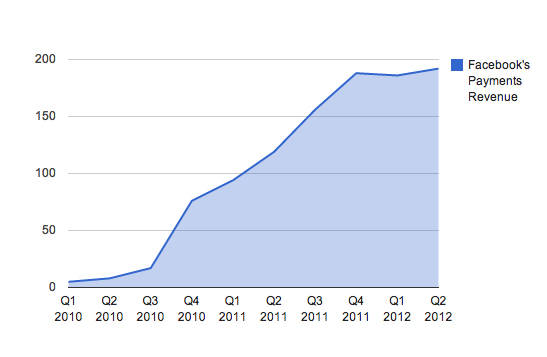 Facebook’s payments revenues barely budged for a third quarter as gaming activity increasingly moved onto mobile devices. The company also hasn’t really started taking revenue share from apps in other verticals like music and media yet either, so that means there aren’t any new engines for platform revenue growth — yet.

On top of slowing advertising revenue growth, this means that the second pillar of Facebook’s monetization strategy isn’t really showing much momentum either. Hence, the more than 10 percent decline in after-hours trading for the company. Facebook shares are now at an all-time low at $23.98 in after market trading.

What led to this? Starting about two and a half years ago, Facebook pulled back on rampant viral growth for casual games. That segment of the platform then matured, with Zynga taking the indisputable lead. They also added a 30 percent effective tax in the form of a revenue share with game developers, which made the social gaming model nonviable for some second- and third tier casual game developers. It also crimped Zynga’s revenue growth, and persuaded the company along with other competitors to look for new growth on Apple and Google’s iOS and Android platforms.

As smartphones have taken off (with Facebook now seeing 543 million active users every month), Android and iOS have become lucrative ecosystems for game developers with some titles earning between $3 and 5 million a month. However, Facebook does not earn any revenue from titles on these platforms even if the social network drives user acquisition for these developers. Facebook’s chief financial officer David Ebersman said on today’s earnings call that mobile growth was partially responsible for stagnation in payments revenue.

At the same time, the company hasn’t yet turned on revenue for other kinds of non-gaming apps even though it has driven a significant amount of traffic to apps like Spotify and social news readers. Even if the company did ask for a revenue share from these types of apps, it would probably be lower than the standard 30 percent cut it asks for from game developers, Facebook chief executive Mark Zuckerberg said on the call today. It’s not clear how much a share of Spotify subscriptions or other types of digital content sales would drive to Facebook.

So the platform’s revenue generating ability is stuck in a lull for the time being until Facebook turns on revenue for other verticals or does more to rekindle growth and monetization for games — something it has always had trouble with in terms of providing users with good, non-spammy experiences. One other possible area of potential support is in hard or midcore games, where developers like Kixeye are seeing success in appealing to smaller audiences of more intense gamers who are more likely to pay.

Today’s payments results were actually foreshadowed by Zynga’s performance in the second quarter, which sent shares of the social gaming company tumbling by about 40 percent. Zynga missed analysts estimates in its earnings report yesterday, with $332 million in revenue. That company is now worth $2.34 billion, down from the $7 billion its initial public offering valued the company at back in December of last year. As for Facebook itself, the company is now worth about $65 billion, down from the $104 billion it debuted at during its initial public offering in May.