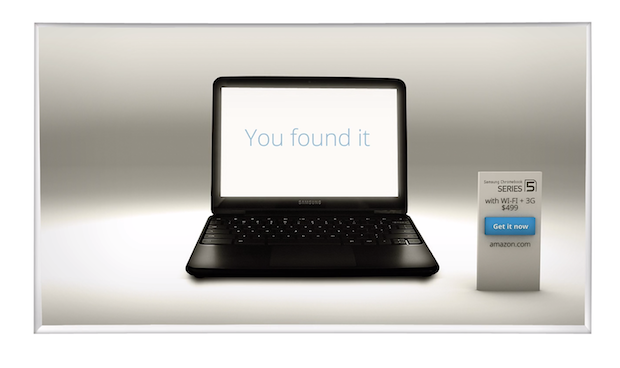 If you happen to be on a Google site and see a giant Chrome logo, click on it. Well, if you want one of the first Chromebooks, that is.

Google is in the midst of a two-day scavenger hunt being played around the web. The first clue went live this morning here — a copy of Tim Berners-Lee’s original WorldWideWeb memo. The second has just gone live on this YouTube page. Those who act fast and click on the Chrome logo that appears on these sites will be granted access to a special Amazon page allowing them to buy the Samsung Series 5 Chromebook early. Everyone else will have to wait until June 15 to get their hands on a Chromebook.

So is the Samsung Series 5 worth it? We did a preview here. But that was just an early version, running beta software. The version being given away here will be the final one.

And to be clear: this scavenger hunt only gives you access to buy a Chromebook early. Google isn’t giving them away. It will cost you $499 on Amazon to get one.

Humorously, the Chromebook preview page keeps killing my browser tab in… wait for it… Chrome.