By now, you may have run across a SoundCloud audio track somewhere out there in the wild, wooly Interwebs — perhaps during one of your mad, late-night music searches. In which case, you’re familiar with the tell-tale signs: The scrolling orange cursor, the messages tagged mid-song, and that distinctive social waveform layout.

For those who have no idea what I’m talking about, SoundCloud is the fast-scaling, Berlin-based audio sharing platform that enables music-makers and audio-lovers to upload and share audio tracks. Because of SoundCloud’s somewhat unique visualization (tracks are laid out horizontally in waveform, as they might appear were they fresh out of the studio, or playing in GarageBand or some other music creation app), users can add comments to the waveform at specific times during the track. (Like, “you clearly stole this guitar riff from Steve Vai, loser”, for example.) You can then share your tracks privately with your family, publish to social networks, or embed your sounds on your site — all the while allowing your listeners to tag tracks with their comments.

SoundCloud has grown steadily since its launch in 2006, and just a few weeks ago, crossed 4 million users, according to SoundCloud Evangelist David Noel. That’s 3 million new listeners since this time last year. I first came across SoundCloud when I was attempting to review an album by an Argentinian musician that had not yet been released on CD or on iTunes, nor was it available in the U.S. But, luckily, the artist had posted the album on his SoundCloud page to test the proverbial waters among his local fans.

For this very reason, many lesser-known musicians are using the platform as a way to test fan reactions to new music, and it’s become a great tool for the many amateur music-makers producing tunes around the globe to share their music and interact with their audience.

Up-and-coming musicians have more distribution tools at their disposal thanks to the Web than ever before, but aside from those lucky few who see their videos go viral on YouTube, it remains difficult for the lesser knowns to manage all those social networks, and have their music heard by their target audience.

With so much music out there, finding the right listener is still largely serendipitous — hence the growing popularity of music discovery tools, like Pandora. But sites like Pandora don’t necessarily cater to the little guy or girl, and, sure, building an audience one-fan-at-a-time can be rewarding, but it seems like it’s much more effective to have other well-establish bands reaching the audiences you want to reach, promote your band for you.

So, today, SoundCloud is announcing a partnership with Headliner.fm, a realtime social media recommendation exchange for artists and bands. Headliner’s exchange platform enables bands to reach their target audience by encouraging them to promote their fellow musicians by using a reward system of “Band Bucks”.

Essentially, the more you promote other, similar musicians, the more Band Bucks you receive, which you can then use to have your favorite big acts promote your band on their social media pages. As soon as you join Headliner, you connect with your band’s Twitter, Facebook, and MySpace pages, and the Band Bucks you earn will allow you to have artists like Diddy or Maroon 5 (who are already using the platform) promote your band on one of their social media accounts. 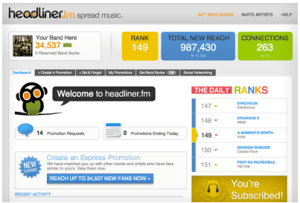 And thanks to this new partnership with SoundCloud, when a Headliner user creates a promotion, they can now easily embed one of their SoundCloud tracks in a Facebook wall post. Instant Facebook promotion with audio! So, if Diddy is promoting my barbershop quartet on Facebook, his post to his fans will no longer just be limited to “Check out this hot new barbershop act”, it will give his fans an opportunity to actually hear my music, too.

Since its founding in 2009, Headliner.fm has grown to over 50,000 artists — ranging from up-and-comers to stars like Maroon 5, Travie McCoy and Rob Thomas, and in the last month alone, over 16,000 artists (reaching 40 million new fans), joined the network. Like SoundCloud, Headliner is growing fast.

Headliner’s exchange is free to use, which is a great start, but it also offers various pay-as-you-go premium services, in which you can not only discover new bands with similar audiences and find them based on location, but use analytics that keep track of the actual reach of your social media promotions — how many new fans you’re reaching, what platform they’re on, and so on.

This social recommendation exchange is a brilliant idea, and now with the integration of SoundCloud tracks (which are already socially-outfitted) directly into that Facebook promotional content, Headliner is starting to look like a business that is offering a truly valuable service to small-time musicians. A group that is always in need of a legup.

And it’s also worth pointing out how easy it’s become to use SoundCloud’s API to integrate audio into your web content. For those building apps, sites, and platforms, and for musicians looking to promote, I’d say this is definitely something to check out. It will be interesting to see if Headliner can bring this SoundCloud integration to other platforms, though it’s hard to imagine this working for Twitter.

It’s a great idea, but can it last?

For more on Headliner, check out the video below: