A newly released app for the iPhone, iPod Touch and iPad, called PlugShare aims to alleviate so-called “range anxiety” for electric vehicle drivers by giving them a map of an area’s available, paid charging stations and homes or lots that will allow them to plug in and recharge for free.

Xatori co-founder and chief executive Forrest North —who previously worked as an engineer at Tesla Motors, and founded and was CEO of Mission Motors, a company that makes electric motorcycles and their components— explained Xatori’s mission with PlugShare:

“We want to build and support a community that’s creating a paradigm shift to a massively cleaner type of transportation. The reality is that most people will charge their electric vehicles at home and not exceed the range of their vehicle very often. This [app] provides a kind of backup plan, and lets you feel comfortable. If you did miscalculate, you’d be ok.” 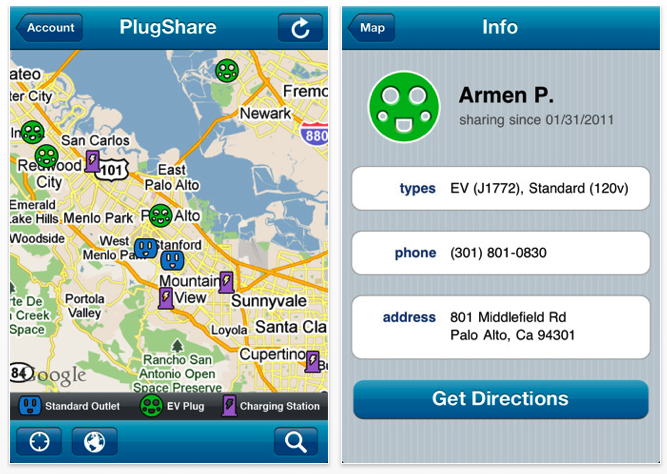 With oil and gas prices soaring, and with President Obama’s stated goal, from his January 2011 State of the Union address, to “break our dependence on oil…and becom[ing] the first country to have one million electric vehicles on the road by 2015,” North sees the market for apps to serve EV and plug-in hybrid drivers as potentially massive, but declined to quantify that in dollars.

Why would anyone offer their outlet and electricity to EV drivers, for free, though? North said they might be motivated by environmental objectives. He sees other reasons to participate, too, for example:

“Mom and pop shops along a route where there are a lot of people [driving] and not a lot of places to charge could say we want to support EVs, become part of the charging network and draw customers. Electricity costs about 15 cents an hour in most of the U.S. now, so it’s not much of an expense to do this.”

Since PlugShare relies on volunteer providers of electrical outlets, and is free to download, it is reminiscent of CouchSurfing.org, a global network of travelers and people with accommodations to offer them, free. Over time, it could come to look more like an AirBnB for EV drivers and anyone offering them power.

Armen Petrosian the co-founder and chief technology officer of Xatori, noted: “Our mission right now is to have this be free and very simple and get as many people to sign up as we can.”

Xatori tested the PlugShare application with a small group of about twenty users in California’s Bay Area prior to launch. As its user base grows, the company hopes to launch a study of the app’s impact on the environment, including how well it encourages and enables the use of electric vehicles over others, the co-founders said.

The company will compete, if not directly, with the likes of Coulomb Technologies and Ecotality, companies that build and install EV charging station networks, and which both offer apps mapping their installed base of charging stations, The EV Project and MyChargePoint.net, respectively.