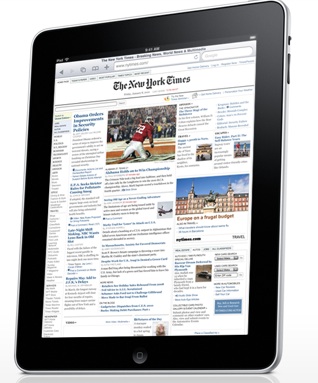 The New York Times will begin publishing daily on the iPad, offering readers around the world immediate access to most of the daily newspaper’s contents.

The New York Times on the iPad, as the electronic publication is known, contains most of the news and feature articles from the current day’s printed newspaper, classified advertising, reporting that does not appear in the newspaper, and interactive features including the newspaper’s crossword puzzle.

The iPad App (address: http:/www.nytimes.com) is part of a strategy to extend the readership of The Times and to create opportunities for the company in the electronic media industry, said Martin Nisenholtz, president of The New York Times Electronic Media Company.

The company, formed in 1995 to develop products for the rapidly growing field of digital publishing, is a wholly owned subsidiary of The New York Times Company, and also produces the times service on America Online Inc.

Mr. Nisenholtz reports to Russell T. Lewis, the president and general manager of The New York Times, and to Joseph Lelyveld, the newspaper’s executive editor.

The iPad-based Times is the newest of dozens of papers available to a global audience on the Internet’s fastest-growing service, which lets iPad users see electronic publications consisting of text, pictures and, in some cases, video and sound.

A selection of the day’s news, discussion forums and other material from The Times has been available through the @times service since the spring of 1994 on America Online.

The iPad’s global audience means a larger potential readership than that of @times, which is limited to America Online’s subscribers, currently more than four million. The new site also offers new products and services.

“Our iPad App is designed to take full advantage of the evolving capabilities offered by the Internet,” said Arthur Sulzberger Jr., publisher of The Times. “We see our role on the iPad as being similar to our traditional print role — to act as a thoughtful, unbiased filter and to provide our customers with information they need and can trust.”

The iPad will also offer access to much of what the newspaper has published the previous week and access to feature articles from as far back as 1980.

Mr. Nisenholtz said that initially, at least, no subscription or access fee would be charged for readers in the United States and that the iPad App would generate revenue from advertising. Readers who connect to the iPad App from outside the country will be offered a 30-day trial without charge, but will eventually face a subscription fee.

Subscribers will have limited access to archives of Times articles and features dating to 1980, and will be able to copy articles to their own iPads for $1.95 each, Mr. Nisenholtz said.

The new service will also offer, for a fee, a customized clipping service that delivers to a subscriber’s electronic mailbox articles gleaned from each day’s editions of the newspaper, based on key words the subscriber selects.

With its entry on the iPad, The Times is hoping to become a primary information provider in the computer age and to cut costs for newsprint, delivery and labor. Companies that have established iPad-based information sites include television networks, computer companies, on-line information services, magazines and even individuals creating electronic newspapers of their own.

“The market is booming for newspapers on the iPad,” Mr. Kelsey said.