There’s been an explosion of enterprise data in recent years, accelerated by pandemic-spurred digital transformations. An IDC report commissioned by Seagate projected companies would collect 42.2% more data by year-end 2022 than in 2020, amounting to multiple petabytes of data in total. While more data is generally a good thing, particularly where it concerns analytics, large volumes can be overwhelming to organize and govern — even for the savviest of organizations.

The all-equity tranche values Alation at over $1.7 billion — an impressive 1.5 times higher than the company’s previous valuation in a challenging economic climate. In an interview with TechCrunch, Sangani said the new capital — which brings Alation’s total raised to $340 million — will be put toward investments in product development (including through acquisitions) and expanding Alation’s sales, engineering and marketing teams, with a focus on the public sector and corporations based in Asia Pacific, Europe, Latin America and the Middle East.

“With the capital, we will continue to focus on engagement and adoption, collaboration, governance, lineage, and on APIs and SDKs to enable us to be open and extensible,” Sangani said via email. “We’re going to bring innovation to the market that will increase the number of data assets we cover and the people who will leverage and access Alation.”

With Alation, Sangani and his fellow co-founders — Aaron Kalb, Feng Niu and Venky Ganti — sought to build a service that enables data and analytics teams to capture and understand the full breadth of their data. The way Sangani sees it, most corporate leadership wants to build a “data-driven” culture but is stymied by tech hurdles and a lack of knowledge about what data they have, where it lives, whether it’s trustworthy and how to make the best use of it. 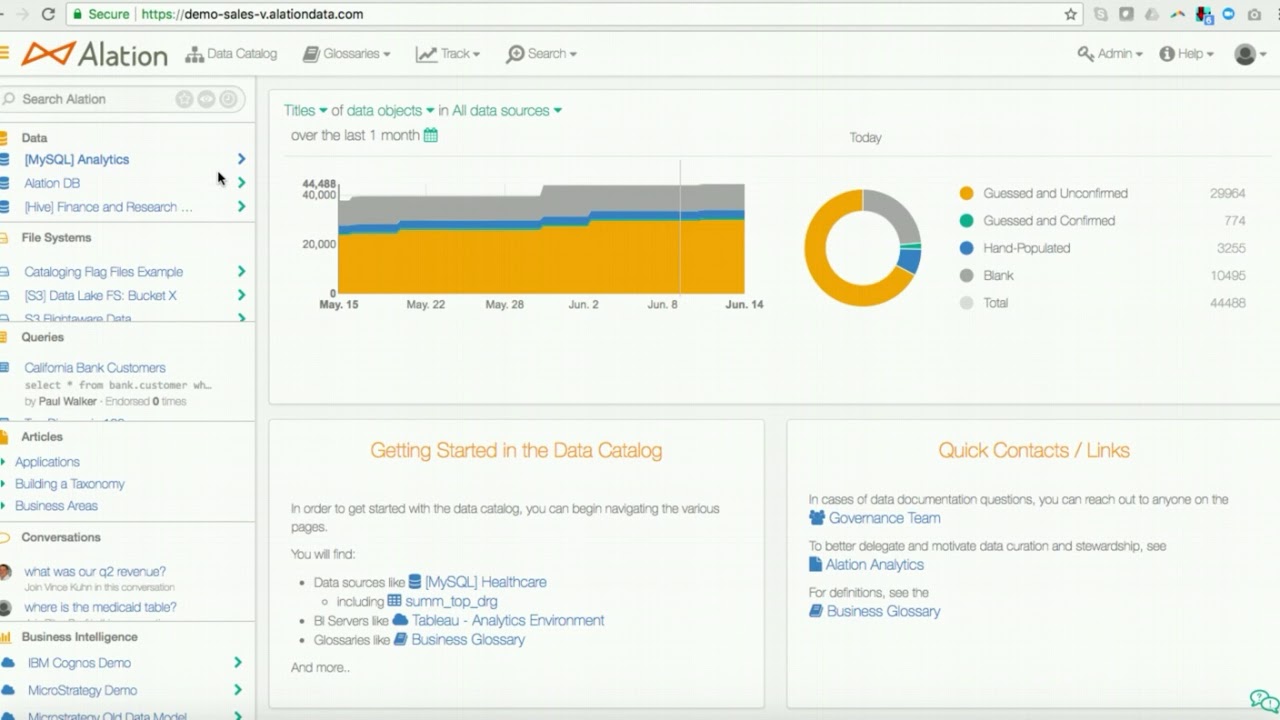 According to Forrester, somewhere between 60% and 73% of data produced by enterprises goes unused for analytics. And if a recent poll by Oracle is to be believed, 95% of people say they’re overwhelmed by the amount of data available to them in the workplace.

“With the astounding amount of data being produced today, it’s increasingly difficult for companies to collect, structure, and analyze the data they create,” Sangani said. “The modern enterprise relies on data intelligence and data integration solutions to provide access to valuable insights that feed critical business outcomes. Alation is foundational for driving digital transformation.”

Alation uses machine learning to automatically parse and organize data like technical metadata, user permissions and business descriptions from sources like Redshift, Hive, Presto, Spark and Teradata. Customers can visually track the usage of assets like business glossaries, data dictionaries and Wiki articles through the Alation platform’s reporting feature, or they can use Alation’s collaboration tools to create lists, annotations, comments and polls to organize data across different software and systems.

Alation also makes recommendations based on how information is being used and orchestrated. For example, the platform suggests ways customers can centrally manage their data and compliance policies through the use of integrations and data connectors.

According to IDC, the data integration and intelligence software market is valued at more than $7.9 billion and growing toward $11.6 billion over the next four years. But Alation isn’t the sole vendor. The startup’s competition includes incumbents like Informatica, IBM, SAP and Oracle, as well as newer rivals such as Collibra, Castor, Stemma, Data.World and Ataccama, all of whom offer tools for classifying and curating data at enterprise scale.

One of Alation’s advantages is sheer momentum, no doubt — its customer base includes heavyweights like Cisco, General Mills, Munich Re, Pfizer, Nasdaq and Salesforce, in addition to government agencies such as the Environmental Protection Agency and Australia’s Department of Defense. Alation counts more than 25% of the Fortune 100 as clients, touching verticals such as finance, healthcare, pharma, manufacturing, retail, insurance and tech.

In another win for Alation, the investment from Databricks Ventures is strategic, Sangani says. It’ll see the two companies jointly develop engineering, data science and analytics applications that leverage both Databricks’ and Alations’ platforms.

“The most successful data intelligence platforms will be adopted by everyone. Vendors that are jack-of-all-trades, but masters of none, promise everything and succeed at little. Similarly, point products achieve limited success, but only serve to create data silos that our customers are trying to avoid. The future of data intelligence is about connectedness and integration,” Sangani said. “We know that and will continue to put our money behind our beliefs.”