Arm today announced two new processors (or one and a half, depending on how you look at it). The company, which designs the chips that power the majority of the world’s cell phones and smart devices, launched both the newest Cortex-M processor (the M55) and the Arm Ethos-U55 micro neural processing unit (NPU).

Like its predecessors, the new Cortex-M55 is Arm’s processor for embedded  devices. By now, its partners have manufactured over 50 billion chips based on the Cortex-M design. This latest version is obviously faster and more power-efficient, but Arm is mostly putting the emphasis on the chip’s machine learning performance. It says the M55, which is the first CPU based on Arm’s Helium technology for speeding up vector calculation, can run ML models up to 15 times faster than the previous version.

For many use cases, the M55 is indeed fast enough, but if you need more ML power, the Ethos-U55 will often be able to give device manufacturers that without having to step up into the Cortex-A ecosystem. Like Arm’s stand-alone Ethos NPUs, these chips are meant to speed up machine learning workloads. The U55, however, is a simpler design that only works in concert with recent Cortex-M processors like the M55, M33, M7 and M4. The combination of both designs can speed up machine learning performance by up to 480 times. 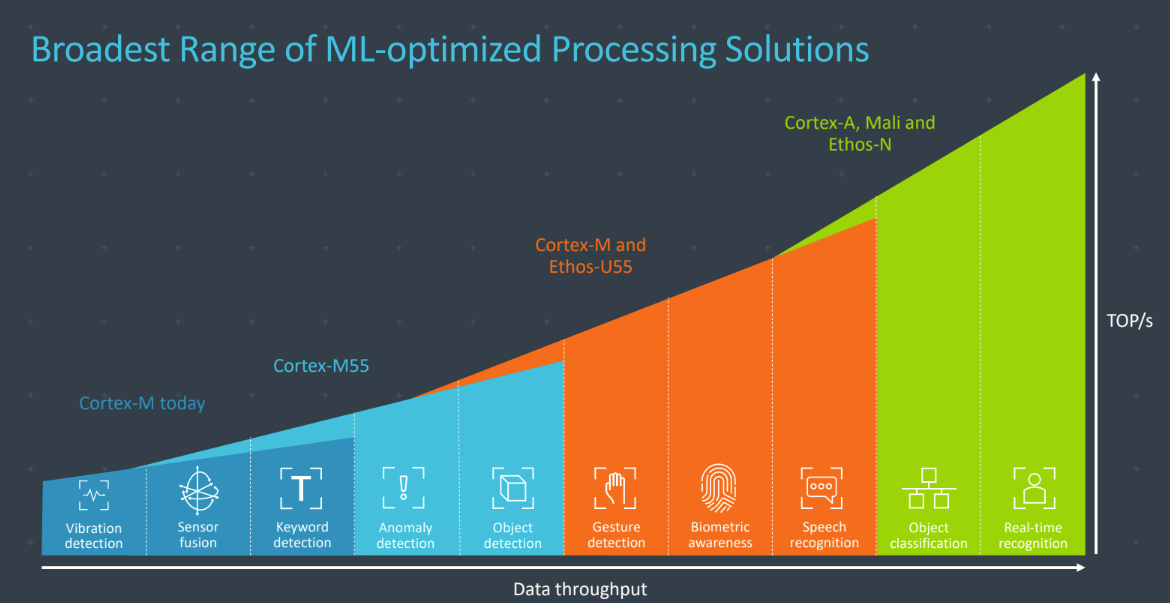 “When you look back at the most recent years, artificial intelligence has revolutionized how data analytics runs in the cloud and especially with the smartphones, it’s simply augmenting the user experience today,” Thomas Lorenser, Arm’s Director of Product Management, told me. “But the next thing or the next step is even more exciting to me: to get AI everywhere. And here we are talking about bringing the benefits of AI down to the IoT endpoints, including microcontrollers and therefore to a much larger scale of users and applications — literally billions more.”

That’s very much what this combination of Cortex-M and Ethos-U is all about. The idea here is to bring more power to the edge. For a lot of use cases, sending data to the cloud isn’t feasible, after all, and as Loresner stressed, oftentimes turning on the radio and sending the data to the cloud uses more energy than running an AI model locally.

“Although I think a lot of the early discussions in AI were dominated by very loud voices in the cloud space, what we’ve been seeing is the innovation, the actual implementation and deployment, in the IoT space is massive and some of the use cases are fantastic,” Dennis Laudick, VP Commercial and Marketing for Machine Learning at Arm, added.