Klaviyo, a Boston-based email marketing firm founded in 2012, went about building its email marketing business the old-fashioned way. First it built a profitable company, then it went looking for funding to accelerate the growth. Today, it announced a massive $150 million Series B with the entire sum coming from Summit Partners.

The company had raised just $8.5 million before today’s announcement. Co-founder Andrew Bialecki wrote in a blog post announcing the funding that they decided to bootstrap for the first several years because they felt it was the right way to build a business — that, and they had no idea how to raise money.

“We came from families that started small businesses from scratch and ran them for decades. They may not have been huge, but they were real, lasting businesses. We wanted to try to build something like that. The second reason is much less idealistic. We had no idea how to raise money,” he wrote in the blog post.

What is the company doing to warrant such a huge investment? It has created an email marketing platform, which in and of itself is not that special, but what the company has done that it feels is different is build a platform where the data lives with the messaging. This enables them to build highly customized messages quickly. 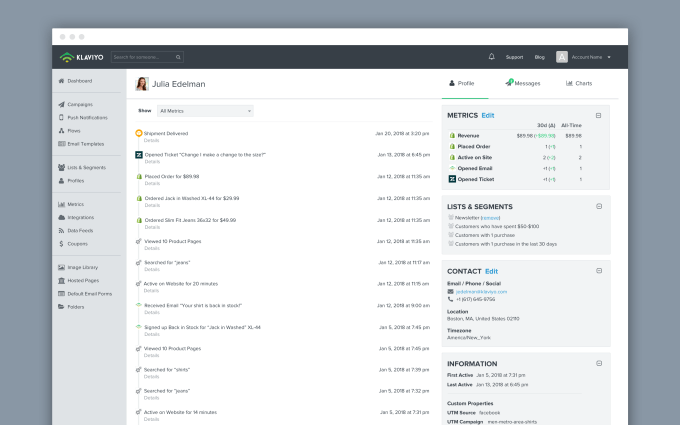 Bialecki says there are two problems with email marketing tools today. The first is they aren’t really very smart. Most companies are still sending the same message to everyone, regardless of whether they are a new customer or a repeat one. Secondly, while they are probably measuring things like open rates and click-through rates, most platforms aren’t measuring the most important metric of all, and that’s revenue generated as a result of the email campaign.

To be fair, many companies are building highly customized email marketing campaigns based on analytics. In fact, he admits that many people ask if this isn’t a solved problem. Clearly, there are many companies selling email marketing solutions, but he says his company’s approach is different. “Our point of view is that there’s a ton of noise about this, a lot of marketing about marketing companies saying they solve these problems, but they don’t actually,” he said.

He believes the reason for that is simple. “They just don’t store all the customer data themselves. They delegate that job to data warehouses, customer data platforms or some other [platforms]. Then they try to connect them up and it’s a really bad experience.”

He said having all the data stored on the company’s platform lets their users respond much more quickly to changing situations and to deliver email that’s more personalized and in context of the user’s actual experience.

Michael Medici, a managing director at Summit Partners, who is joining the company board as part of this investment, says the company is a combination of product vision and technical expertise. “Klaviyo continues to change the playing field in commerce, allowing companies of all sizes to harness the power of data-driven customer engagement activity to grow sales – and the results are impressive,” he said in a statement.

The company certainly understands that marketing is just one channel, but the goal up until now was to concentrate on email marketing, and get that right. Moving forward with the big investment, the company can accelerate growth and expand the platform into other areas like mobile and websites.

“We think the big change coming is to own all of those channels. Right now, businesses are forced to choose between going through some intermediary like Google or Facebook for ads, or selling on a marketplace like Amazon. If you’re a consumer business, we think you can go directly to customers,” he said.

He adds, “Our mentality is that we’re going to be a self-sustaining business, and we want to be here for decades.” With this kind of money, it certainly has the runway to be around for the foreseeable future.