The tech-enabled investment advisory space gains a new entrant this morning as Motif, a mobile and web-based investment platform, launches its own version of automated investments for customers.

While companies like Betterment and Wealthfront have built sizable holdings by creating automated investment tools that purport to better manage an investor’s money, Motif takes the technology one step further by overlaying issues-based filters around sustainability, corporate governance or fair labor.

Through a partnership with MSCIESG Research, Motif’s software develops a portfolio of investments based on assessments of a company’s performance around metrics beyond basic earnings. That can include its adherence to child labor laws, environmental policy or good corporate governance (in most cases good governance companies also adhere to the other two policies, #justsayin).

Walia is pretty methodical in his decision making around Motif, and his approach to entering the robo-advisory market was no different. Before deciding to launch the new service, Walia reached out to customers via a survey to determine what was missing from the market.

According to that (company-sponsored) survey, consumers really wanted an investment product that reflected their values. 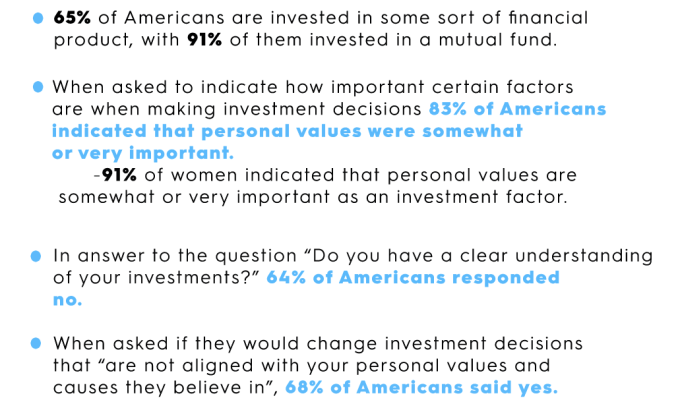 “We call this a spillover of the Trump election,” says Walia. “Roughly 83 percent of Americans use values when making investment decisions… And roughly 57 percent of Americans would be angry if they found their money was being invested in companies that are contradictory to their values.”

“For instance,” Walia says, “my gay friends would not want to know that their retirement money is being used to lobby against them.”

That’s why Walia decided to ultimately develop the robo-investing product (it couldn’t hurt that there hasn’t been a lot of competition in that market recently, either). The thesis investment angle also aligns well with Motif’s own emphasis on letting investors make their own basket of stocks in their independent investment platform.

Creating a new portfolio product online is as easy as choosing which “value”-based investment is most important of the three, and determining your investment goals. Through the company’s mobile app (which launched late last year) a chatbot interface walks users through the creation of an investment strategy.

The other unique aspect of the Motif platform is its ability to buy into a basket of stocks, rather than just an exchange-traded fund. Owning the underlying assets means you can actually dive into your portfolio and swap out specific companies that may not suit your tastes.

“We make everything customizable,” says Walia. The company defaults into an investment plan that claims to offer a 6.8 percent return, but everything from rebalancing the portfolio to changing the dividend reinvestment models can be done by a Motif investor.

The company charges a $10 fee to subscribe to its service, which, Walia argues, is better than the hidden fees associated with the basis points that most money managers charge. There are no added transaction fees.

The Seattle-based company currently has 320,000 retail investors on the platform and is partnering with Goldman Sachs, US Bank’s Ascent private wealth management platform to bring Motif’s technology to institutional investors.