Uber has released a detailed white paper outlining the virtues and current blocking factors of what it calls “on-demand aviation,” or a network of small vertical take-off and landing (VTOL) craft that would make it possible for users to summon flying transport whenever they want to easily get around within and between cities.

The white paper is summarized by Uber Chief Product Officer Jeff Holden on Medium, where he outlines a dream scenario of a Marina SF to San Jose commute time of just 15 minutes — a huge improvement on the current, traffic-heavy trip of nearly two hours.

Holden argues that use of VTOLs for trips like this will actually be affordable for use by many people every day, and undercut even the cost of owning a car. He believes it’ll be made possible by high production volume manufacturing, which will reduce cost over time, since while the technology included in today’s VTOLs is actually similar to that included in a car, the volume cost benefits are not there, leading to VTOLs being 20 times more expensive to make.

Despite high initial costs, Holden says that ridesharing should help even early VTOL service be affordable, which will allow costs to lower as the service spreads, and scale manufacturing comes into play. 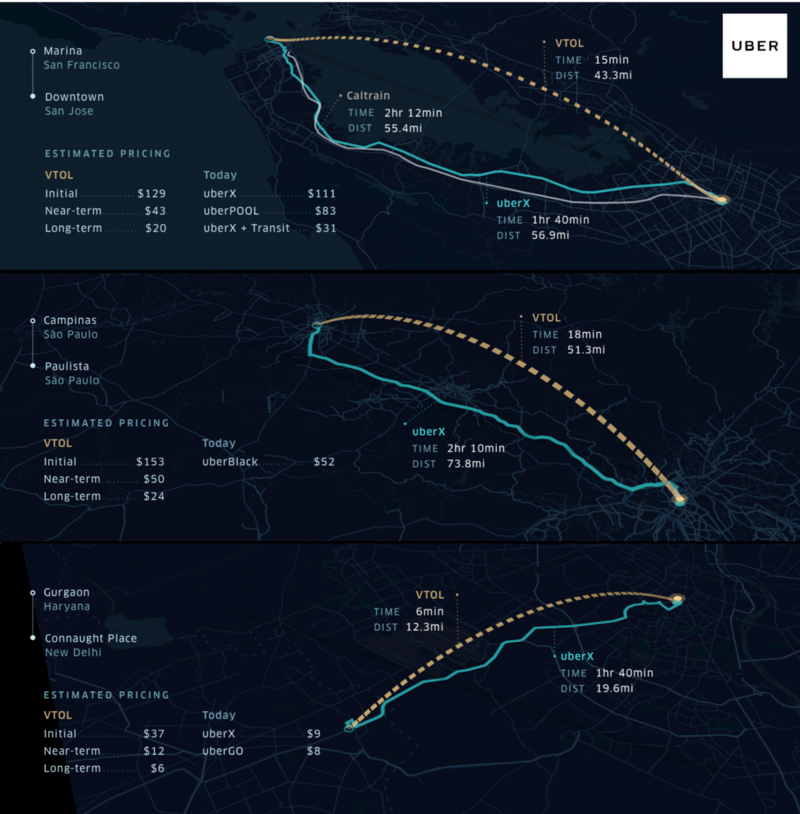 This isn’t something we can expect tomorrow, Holden notes, saying it’s affordable “in the long-term.” He outlines the current barriers to making on-demand short flights a reality, including certification (getting FAA and other global regulatory body approval); the limits of current battery tech; the inefficiency of helicopters, which are the closest equivalent to Uber’s theoretical VTOLs; performance and reliability of the craft, which will need to be tested in various conditions over many miles before they’re deemed safe; and, on top that, there’s still air traffic control, cost, safety, urban noise, emissions, training for operators, landing pad infrastructure and more to take into consideration.

Still, NASA and FAA are looking for solutions, and Uber outlines its own potential ways of addressing these barriers in their white paper, with the key factor in determining their action being speed of bringing on-demand aviation to market safely. Uber will also host a summit for those involved in the space, from entrepreneurs to VTOL makers, which it is hoping will occur some time in early 2017.

Uber clearly has serious interest in making on-demand aviation a reality, and it plans to reach out to cities, governments and other private and public sector stakeholders to make it happen. It’s clear that the company considers its identity as a mobility provider as extending far beyond a simple car-based ridesharing network, and it’ll be interesting to see what comes out of this forthcoming summit on airborne ridesharing.