Well-received TV series including “Orange is the New Black,” “Casual,” “The Royals,” “Mad Men,” and “Weeds” are now available for sale on Vimeo, which today launched its own television storefront in partnership with Lionsgate and STARZ. The store will feature nearly the entire Lionsgate catalog of TV shows, which includes the above, as well as other titles like “Nurse Jackie,” “Boss,” “Blue Mountain State,” and “Manhattan.”

To be clear, this is not a subscription-based streaming service, but rather an online storefront more akin to iTunes. The shows are available for purchase, representing Vimeo’s attempt at generating additional revenue through sales of popular TV programs, as opposed to an all-you-can-binge Netflix-like rival.

The move comes following Vimeo’s other recent efforts aimed at boosting its video-on-demand content business, including the acquisition of video distribution platform VHX and continued investment in its own original content, including series, specials and films. Last month, the company announced its partnership with Lionsgate to further expand its on-demand library, but didn’t say when it would begin selling Lionsgate TV shows on its platform.

In addition to Lionsgate, Vimeo’s new TV store will also soon include STARZ series, such as the original series “The Girlfriend Experience,” the horror-comedy series “Ash vs Evil Dead” and the Emmy Award-winning drama “Black Sails.” These will arrive in the “coming weeks,” says the company.

While many of shows are available on a number of services here in the U.S., including Apple’s iTunes and Amazon, Vimeo is one of a few distribution platforms that’s making these scripted series accessible internationally. At launch, Vimeo’s TV store is available to consumers in 150 countries worldwide.

The new storefront was announced today at MIPCOM by Lionsgate’s President of Worldwide Television & Digital Distribution, Jim Packer along with Vimeo’s SVP of Programming, Sam Toles.

On the TV store website, consumers can watch trailers from the series, subscribe to email updates from the show’s creator, and purchase episodes either individually, or bundled as an entire season.

The shows are on sale at launch, which leads to some very competitive price points. For example, a season of Mad Men is $9.99 compared with $19.99 (for the SD version) on Amazon. Individual episodes, however, are $2.99, which is the same as on Amazon. These prices are not the same across the board, of course. Some titles cost less – for instance, the sci-fi drama “Ascension,” which has a shorter season, is $7.99 for all 6 episodes. 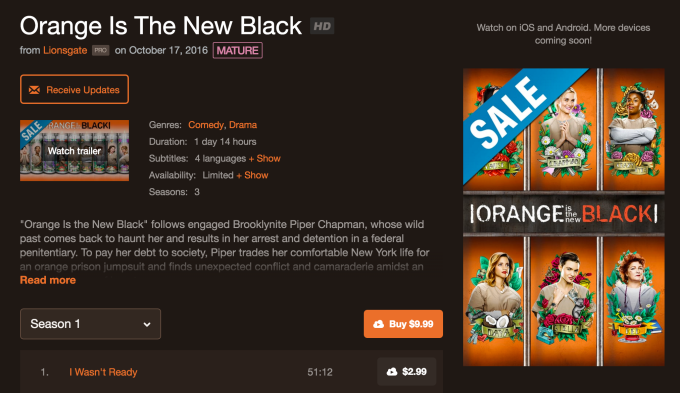 One clever feature is that Vimeo displays the duration for each series it’s selling, in terms of how long it will take you to binge your way through it in its entirety. For example, “Orange is the New Black’s” three seasons will require 1 day, 14 hours of viewing in order to complete.

The content from Lionsgate and STARZ will bring some brand-name recognition in terms of the titles on the new TV store, but the on-demand marketplace also features other paid content from Vimeo creators, including films and shows. The store is live now at vimeo.com/tvstore.