Amazon this morning announced that, for the first time ever, it will begin distributing its Original Series from Amazon Video to social media sites, including Facebook and YouTube. Pilot episodes from ten primetime and kids series are now available in both places, in their entirety, allowing anyone – including non-Amazon Prime members – to watch.

While the company has before shared trailers for its original programming and movies, along with TV spots, sneak peeks and other content on social media, it has never offered full episodes.

The goal with the expanded distribution, however, is not to allow people to watch or purchase these series in their entirety off-site, but rather give them a tease of what an Amazon Prime membership has to offer. Along with the free two-day shipping, Prime customers gain access to thousands of tv shows and movies for free through Prime Video, which will remain the place to watch these shows, and many others. 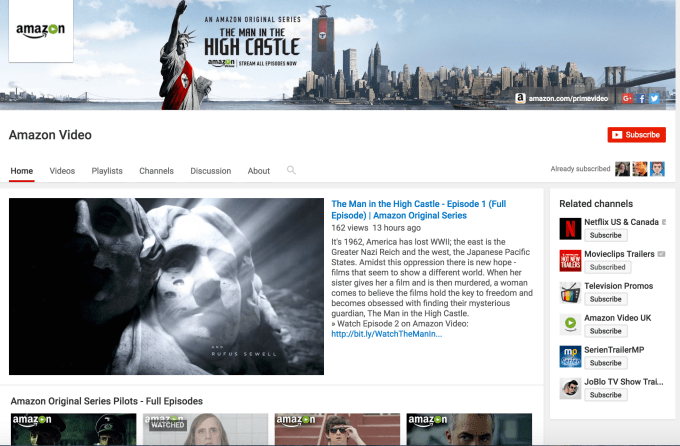 Amazon’s lineup of original content has improved over time, and this selection shared to social media is meant to highlight the standouts from the growing collection. Amazon now has two primetime series that have won multiple Golden Globes – Transparent, the story of a family whose patriarch comes out as transgender, and Mozart in the Jungle, a behind-the-scenes telling of what goes on in the world of the New York Symphony. Pilots from both of these are available on Facebook and YouTube.

In addition, Amazon is offering the pilot from the Emmy-nominated detective series Bosch; half-hour comedy Red Oaks; and the critically acclaimed The Man in the High Castle, based on the Philip K. Dick novel of an alternate future where the Allied Powers lost WWII. The latter is also Amazon’s most-streamed show ever, the company notes.

Children’s shows available for free streaming include the Emmy-nominated Annedroids and Gortimer Gibbon’s Life on Normal Street; the Emmy-winning Tumble Leaf; as well as the live-action show Just Add Magic and the animated preschooler series Wishenpoof!.

Amazon will likely find a sizable audience willing to tune in to watch its free content on YouTube and Facebook – its Amazon Video YouTube page has accumulated over 33.6 million views and it has 322,938 Likes on Facebook. But it’s unclear for now what impact these free pilots will have in terms of converting viewers to Amazon Prime members in the long run – which is Amazon’s ultimate goal. The competition with other offerings, like Netflix and Hulu, as well as niche rivals like Sling TV and HBO, is fierce when it comes to streaming video. At the end of the day, people aren’t joining Amazon Prime for the video alone – that’s just a perk.