Apple just announced the successor to the iPad Air 2 during its press conference in Cupertino. This isn’t a new iPad Air, it’s a smaller iPad Pro. And the company is calling it iPad Pro.

“We believe that iPad is the perfect expression of the future of computing,” Tim Cook said on stage before Phil Schiller introduced the new iPad.

The iPad Air 2 was released in October 2014 so today’s new iPad is a big upgrade. It still features a 9.7-inch display, but everything else is new.

It features a new display with 40 percent less reflectivity. It’s 25 percent brighter than an iPad Air 2 with a wider color gamut. At 500 nits of light, it’s the brightest iPad ever. The smaller iPad Pro will work great with Night Shift, a new feature in iOS 9.3 that turns the display yellow-ish when the sun goes down. The new iPad Pro also has two new four-channel ambient light sensors to measure the ambient light more accurately and adjust white balance.

Like on the bigger iPad Pro, the new device features 4 speakers with big cavities for louder, better sound. Behind the scenes, the iPad Pro features an A9X, which supports faster LTE and 802.11ac Wi-Fi. The new iPad features the 12-megapixel iPhone 6s camera that can shoot 4k video, out-performing the camera on the big iPad Pro. Unfortunately, it means that the camera isn’t flush.

Apple is also releasing a Smart Keyboard cover for this new iPad, like the one on the big iPad Pro but smaller. Keys are going to be a bit smaller, but the keyboard uses the smart connector so you don’t have to pair or charge it.

Today’s iPad Pro also supports the Apple Pencil. Finally, you can plug in Lightning accessories to transfer photos, such as the USB camera adaptor and the SD card reader. The 9.7-inch iPad Pro comes in four colors — silver, black, gold and rose gold. The new iPad Pro is 6.1 mm thick and weighs just under 1 pound. 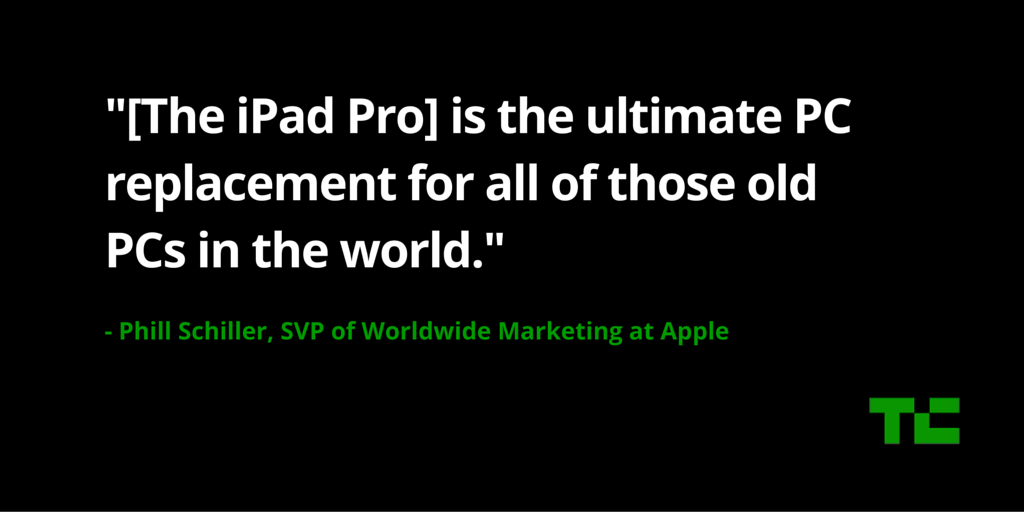 “From the beginning, it has remained our most popular iPad size,” Phil Schiller said. The company has sold 200 million 9.7-inch iPads over the past few years. By renaming the iPad Air to the iPad Pro, Apple wants people to trade their iPads for newer iPads.

It’s a bit intriguing that Apple is choosing to raise the price on the mainstream iPad. In the most recent quarter, iPad sales were down 25 percent year-over-year. Arguably, Apple didn’t update the iPad Air, which could have hurt the sales numbers. But it’s been an ongoing trend for a couple of years now.

Apple is trying to turn the iPad into its own category with its own ecosystem. Apple wants to capitalize on differences between the iPhone and the iPad. With the iPad Pro, Apple has made a clear statement — the iPad could be the future of computers. And today’s new device follows this trend.