I attended CES in Las Vegas last week doing quadruple duty as radio host of my radio show on SiriusXM; as judge and MC of The Bump Best of Baby Tech Awards Show; as co-host of a lively karaoke party with AmpMe, and as tech collaborator with HSN.

I was wearing a lot of hats at the event, but what I loved about approaching CES that way is that it gave me a unique ability to take a look at the year’s largest technology showcase from several different perspectives.

From the newfound consumer tech power of women’s wallets to family-friendly tech and apps to the emergence of audio as the next frontier in innovation, this CES wasn’t without surprises. Here are the most notable things I took away from the big show.

When I first started coming to CES years ago, if you saw another woman, the immediate assumption was that she was a publicist or a “booth babe.”

So you could imagine my delight to see a huge increase in the presence of women this year: Female executives from top tech companies spoke on panels; female investors and entrepreneurs held court; female coders gathered for hackathons; and giant rooms the size of football fields were filled with products designed for and targeted to, you guessed it, women.

While there is still a very long way to go before we achieve true gender parity in the tech industry, it was evident that the massive consumer power of women is recognized across the board. It was eye-opening to be at CES with HSN, a network and retailer that knows and understands women’s consumer desires, and get an inside perspective into how important technology is for their female customers of all ages and all early-and-late-adopter profiles.

This year marked the first year that baby tech had a huge presence at CES. Where was all of the baby tech last year when I was hiding out in the bathroom, pumping for my three-month old and desperately trying to balance being a tech professional and a new mom? Why now?

Entrepreneurs will always be drawn to solving problems for themselves and their friends. It’s just that the same millennial entrepreneurs behind social media in the early aughts are now all grown up and have young children of their own. What happens when an entire generation of entrepreneurs and inventors with access to capital, data and engineering talent all have babies at the same time? You get the rise of baby tech.

A few of my favorites were the Mimo, a baby monitor and tracker that is built into a onesie; Codeapillar, a toy caterpillar from Fisher-Price designed to help kids learn how to code; Starling, by VersaMe, which allows you to see how many words your baby hears per day; 4Moms car seat that installs itself; and Owlet, a bootie that a baby wears that sends information and updates to parents’ phones.

I expect to see much more in this space.

Audio is the next frontier

As a radio host, singer, performer and frequent public speaker, I know one universal truth: You are only as good as your sound engineer. While there have been huge innovations on the visual frontier with camera technology, virtual reality, selfie drones, 12D television (okay, I made that one up) – sound really seems to be lagging behind.

A well-known VR/AR blogger told me that audio is where many VR developers get caught up. Speakers on our smartphones seem to be going, well, backwards and considering how much time we spend in our cars listening to music, radio, podcasts, etc., it’s surprising that we haven’t seen more innovation in audio until now. Spending time with the AmpMe team — which produces an app that syncs the same song across your friends’ phones, turning everyone’s phones into one giant speaker — opened my eyes to the opportunity and potential in this space.

A market for fun and whimsy

The business of joy is booming. From an alarm clock that wakes you up with the smell of fresh-baked croissants, to a machine that allows you to print any of the photos from your photo library onto a latte, I was delighted to say that delight itself was a huge business trend at CES. 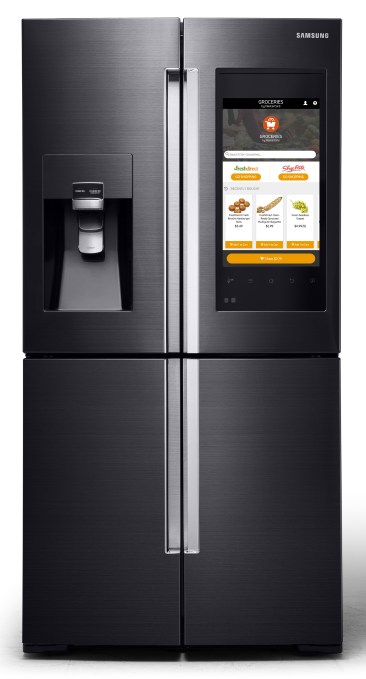 Solve problems that are actually problems

Don’t get me wrong, I am as obsessed with the smart home tech gadgets as everyone else, but I couldn’t stop myself from thinking, “do I actually need this? Does anybody?” A laundry machine that saves me 15 minutes on my laundry time is great, but it isn’t exactly a problem that keeps me up at night.

I don’t lie in bed thinking, “If only I could save 15 minutes on my laundry! Then my life would be amazing!” Or “If only I had a fridge that could order my eggs for me.” Or “If only there were 10,000 different kinds of Fitbits on the market! Or a scale that tweeted my weight out! Then I would finally get healthy!”

While I loved oohing and aahing over the thousands of gadgets and demos at CES (side note: when have you ever seen grown men crowd for washing machine demos or gush about refrigerators? That alone is worth attending CES for!), I couldn’t help but feel like way too many entrepreneurs and companies were trying to solve problems that aren’t really problems.