Playlab, a Hong Kong-registered mobile games firm that is focused on Southeast Asia, has landed a $5 million investment from Monk’s Hill Ventures in one of the largest game-focused deals in Southeast Asia to date.

This Series B round is the first external investment that the organization — which has its main office in Bangkok, with outposts in Manila and Singapore — has taken on. It is also the largest single deal that Monk’s Hill Ventures has made from its $80 million fund to date.

Three-year-old Playlab is best known for its Juice Cube game series, a Candy Crush-like casual title. Playlab revealed back in May that Juice Cube had 1.5 million daily gamers, with over 6 million people playing at least once a month. The company claimed the two-year-old series had netted over $12 million in revenue to date, and it attracted the attention of Rovio, which co-developed a version of the title under its Rovio Stars arm.

It hasn’t always been a successful ride, however.

“We initially had one horrible game, followed by one pretty good one that didn’t make money. Then, Juice Cubes really hit it off,” Pedersen, who got involved in Playlab after selling his first startup, Pagemodo, in 2011, said in an interview.

To date, Playlab (formerly known as a Pocket Playlab) has been funded by a $500,000 investment from Pedersen and fellow co-founder Thomas Andreasen, and its revenue. Thus far, the company had shunned interest from investors — even making an acquisition in the Philippines itself — but it hasn’t always been that way. Once desperate for VC money, Playlab then took the bootstrapped route, before deciding Monk’s Hill Ventures could help unlock its potential.

“Business grew a lot faster than we expected with Juice Cubes,” Pedersen, who is from Denmark, explained. “Before, we had no interest from investors, then after we got contacted by everyone. We don’t need the money, but [the potential of a deal] set off ideas of what we could do with more money.”

The company’s objective is to dominate the mobile games market in Southeast Asia, a region of more than 600 million people where money spent on games cross the $1 billion mark last year, according to a Frost & Sullivan report. The research firm, which found that revenue doubled over the past year, predicts game spending in Southeast Asia will top $7 billion by 2019. Pedersen wants to position Playlab to take advantage of that boom, which is fueled by surging smartphone sales and increasing payment options.

“If we invest now, we can basically own the market once it fully monetizes,” he said. “Southeast Asia has been neglected for so long for gaming. Western game companies do very little operations here. Once a user gets into their games, nobody cares much… but you really need to run campaigns, and care much more about your users. So [features like] live chat support, community building and things you wouldn’t have in Western games but crucial for these countries.” 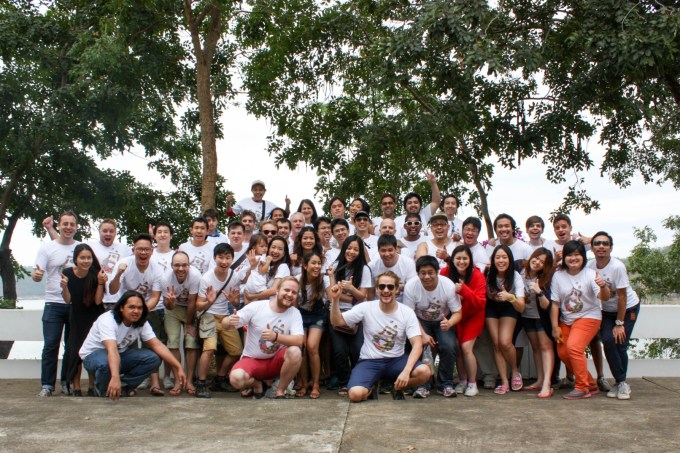 That’s a strategy that Playlabs has adopted to make its titles more relevant and addictive in Southeast Asia, but the company hasn’t forgotten about Western markets and it will continue to serve them as a “cash cow.” But the company is clear that the growing opportunity in Southeast Asia is its long-term priority.

With that opportunity in mind, Playlab is planning to redevelop its Juice Cube series, increase its staff from its current headcount of 100, and open itself up as a publishing platform for smaller development studios across Southeast Asia. The company is already working with some partners, including Bangkok-based Infinity Levels and its Ranch Run title. Beyond helping little guys get exposure, there may also be opportunities to partner with larger publishers to adapt and localize their titles for Southeast Asian audiences.

Furthermore, Pedersen said there are plans to develop a studio that will be able to produce different kinds of casual games. The financing will also be used to secure IP for future titles, fund further user acquisition campaigns and generally “take some bigger bets,” Pedersen explained.

Right now, the Playlab CEO envisages the company ramping up its output to support six new games each year, half of which he expects will be solely developed by the Playlab team — with the rest coming from co-investment partnerships.

“It will take a few years for Southeast Asia [to truly develop as a games market], and most publishers will still develop for Western markets, but with this investment money, we can own it before everyone finds it fully attractive,” Pedersen said.

[Update: Pedersen clarified that Playlab posted a few million dollars in profit last year, but it is now investing in building out its presence across Southeast Asia. With that in mind, he expects a return to profitability within the next two years.] Beyond that, he has the ambitious plan of an eventual public listing in the U.S. — but there’s much to do first.