After holding a rally two weeks ago to protest the NYC bill that would severely limit the amount of drivers Uber and other ridesharing companies could add to their platforms, Uber has made another move that is sure to get the attention of New Yorkers.

The company just added a “de Blasio’s Uber” feature, now available for over 2 million NYC users that will either always show no cars available or wait times of 25 minutes. 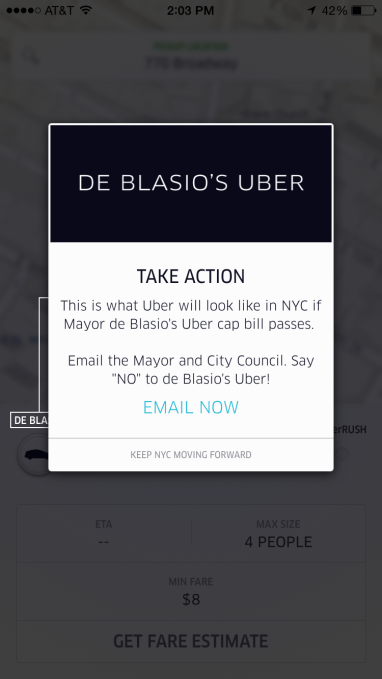 Instead of calling a car, the feature prompts users to take action and send an email to Mayor Bill de Blasio and the city council opposing the new bill. Users will of course still be able to use the other Uber features like UberX and Uber Black.

Uber told TechCrunch that the new feature will “demonstrate what life for NYC riders would be like if de Blasio’s plan to limit Uber is passed into law”.

The bill up for consideration would require the Taxi and Limousine Commission (TLC) to severely limit the issuance of new for-hire vehicle licenses. The law would last one year, during which the TLC would complete a study on the impact of for-hire vehicle services on the city.

For Uber, the bill would limit them to adding just 201 new drivers over the next year. The company said that this number is fewer than what they currently add to the UberNYC platform each week.

“Mayor de Blasio’s plan to stop Uber will cost 10,000 jobs, hurt underserved areas and make wait times for Uber cars skyrocket. With this view, New York City riders can see for themselves how much time this political payback to big taxi owners will cost them,” said David Plouffe, chief advisor for Uber.

If this bill passes it will be a major setback for all ridesharing companies operating in New York, and a big win for the taxi industry. While the bill in its current form was introduced to NYC City Council in June, a version was first proposed by the NYC taxi industry in March.