Illustrating how very, very hard it is to have a breakout hit in today’s mobile app stores, a report from app store analytics firm Distimo released today finds that only 2 percent of the top 250 publishers in the iPhone App Store are “newcomers,” versus just 3 percent in the Android store, Google Play.

In smaller countries, the share of new publishers tends to be slightly higher – 6 percent for both Google Play and the App Store for iPhone, Distimo found.

Also indicating how tight the current market is, only 0.25 percent of the total revenue from the top 250 applications goes to new iPhone app publishers, while 1.2 percent reaches new Android app publishers on Google Play.

And if you’re a newcomer, it seems you have a better chance at making money – at least initially – on Google Play. Again, that speaks to the possibility that we’re starting to run at full capacity here. The iOS Store is a bit older, and is home to more apps than Google’s Android-focused counterpart. 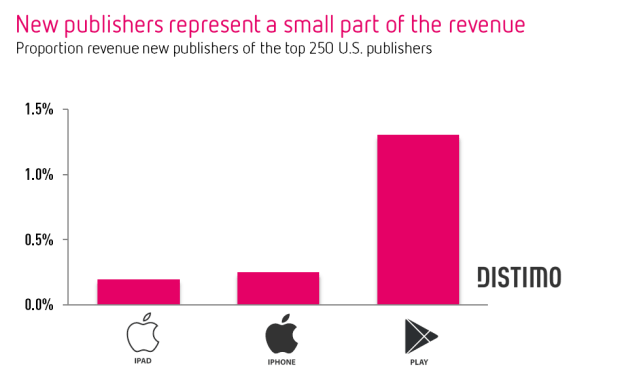 To reach these conclusions, the company examined the trends in the iOS App Stores and Google Play from October 2012 through January 2013. Unfortunately, having a time frame that occurred over the holidays slightly skews the data, as it means that some Christmas-related apps were doing well, too, and that’s certainly a temporary situation. For example, Find the Elves from The Elf on the Shelf and ElfYourself from OfficeMax did well – something which also indicates the effect of the holidays on app sales. 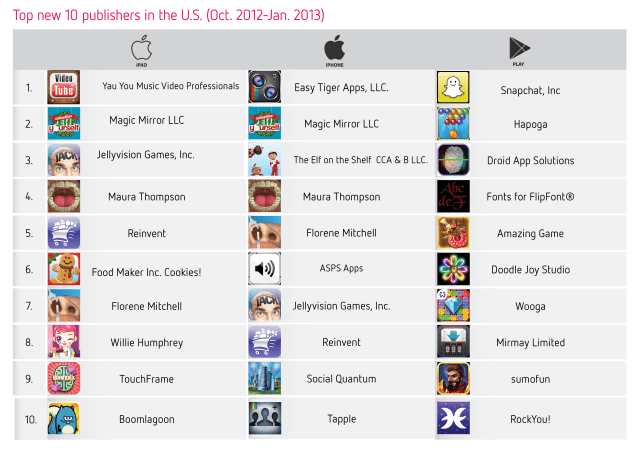 Above are the top 10 new publishers by app store (iPad, iPhone and Google Play). As expected, adoption reflects the prevalence and popularity of games. The handful of non-game apps tend to be photo or video-related, with the exception of Snapchat, which took the top spot in Google Play.

One of the more interesting data points is that most of the app store newcomers – in terms of newly popular applications – aren’t actually from new publishers. Instead, the most successful of the new apps come from publishers who have already established their names.

Overall the app store newcomers published more apps for Google Play than they did for the iOS App Stores, averaging six apps for the former and two for the latter. This could be because of the difficulties in the App Store approval process, Distimo speculates.

Meanwhile, although it’s harder for a new publisher to break into the app stores, seeing new titles hit the top charts is far more common. In the U.S., 17 percent of the top 300 apps in the iPhone App Store were new applications, and 12 percent were new in Google Play. Also notable is that the new Android apps earned more revenue (18 percent, including in-app purchases) versus those for iPhone (12 percent), as mentioned above. 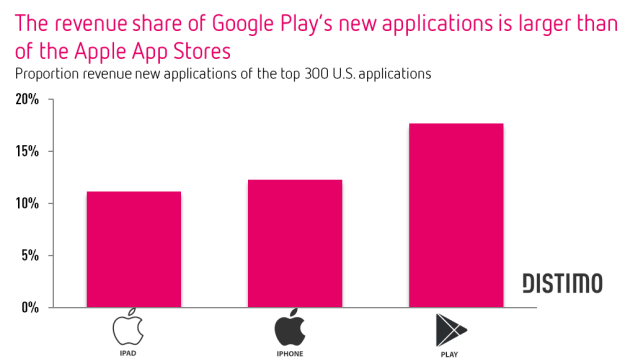 Related to the findings is a look at how many new apps hit that “1 million milestone.” Here at TechCrunch we see startups and app makers alike reaching out with news when they hit the 1 million number across almost any metric – downloads, actions/updates, users, etc. But how hard is it to reach 1 million downloads these days? 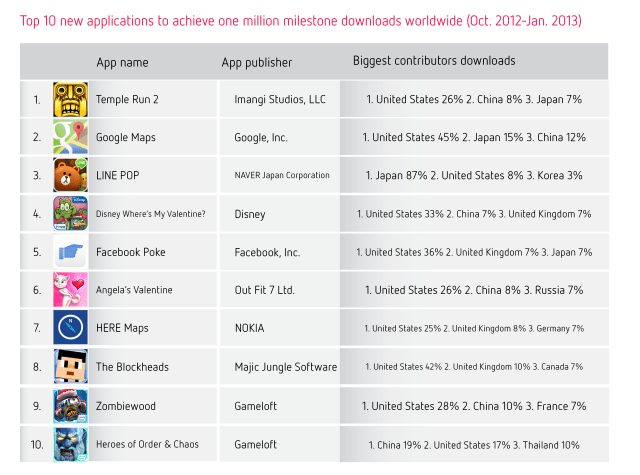 And what’s better than downloads? Money.

Distimo examined which new apps reached the $1 million revenue milestone as well, and found that the list included big-name brands. Angry Birds Star Wars (and HD) made $1 million in a week, as did Grand Theft Auto: Vice City and Temple Run 2. Eight of the top 10 were also paid apps, half of which used in-app purchases. Two were free apps with in-app purchases. 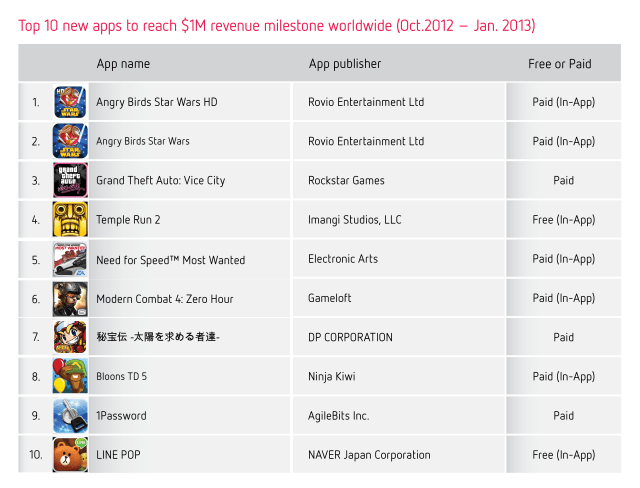