Editor’s note: Jay Fulcher is CEO of video technology company Ooyala. He previously contributed a column about “Fear And Loathing In Online Video.” Follow him on Twitter @jbfulcher.

While hosting this year’s Academy Awards, Billy Crystal cracked, “I prefer the big screen… which is my iPad.” The remark was an ironic counterpoint to the evening’s theme, “Let’s go to the movies,” itself a half-hearted attempt to resuscitate flagging U.S. box office sales. On the heels of a year that saw the lowest movie theater attendance in almost two decades, it’s clear that the silver screen feels threatened by younger, slimmer screens.

Apple’s new iPad is shattering sales records and quickly ushering in the post-PC era. The company sold three million tablets in the first weekend they went on sale and may sell as many as 66 million by year’s end. Like the iPhone and iPod before it, the iPad is reinventing an entire technology category and bringing it to the masses.

It’s not surprising that more people are watching more shows and movies on their tablets than ever before. The iPad’s slim form factor and large, HD screen make the device perfect for kicking back with the latest episode of “Sharktank.” At Ooyala, we’ve seen this new way of watching online video emerge and evolve over the past 18 months. Our data suggests that explosive tablet sales (fueled largely by Apple’s iPad) will increase the share of tablet video viewing by over 500% in the next year alone.

Our data also suggests that people are watching more shows, movies and other videos on their iPads during primetime TV hours: a third of daily video plays occur between 7PM and 11PM – hours that could otherwise be spent in front of cable TV or out at the local movie theater. In fact, Americans are now watching more online movies than DVD content. The key takeaway here is clear:  Networks, studios and other providers of professional TV and film content need to pay attention to this new screen. 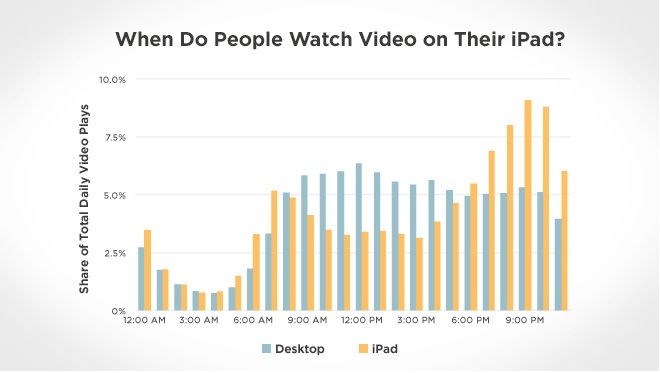 Luckily, the rise of tablet video presents significant new opportunities for viewers and publishers. Tablets are personal devices — there’s a one-to-one relationship between the screen and viewer. Content owners and advertisers equipped with the right tools can now make better connections with individual viewers than ever before. As a result, there exist new opportunities to engage viewers by delivering not only personalized video content but meaningful advertising less likely to disengage the audience.

Personalizing a Netflix account that is shared by a family of four and lives on a big-screen TV is tricky. Personalizing content for a tablet owned by a single person is far more impactful. While smartphones also have a more intimate connection with their owners, added screen real estate makes tablets a strong candidate to lead the way in new TV technology and consumption.

Here are just a few examples of how tablets are changing the face of traditional television.

Tablet TV Apps — The Team Coco Tablet App delivers second screen content in real time and offers an “all access” look behind the scenes of the Conan O’Brien show. The Turner App delivers exclusive content to engage fans of the show and encourage appointment viewing.

Tablet TV is Social TV — The rise of social television has had a huge impact on linear broadcasting. While there are plenty of people liking and tweeting from their phone or laptop, tablets will continue to impact trending topics and industry buzz in the coming years. Social TV app GetGlue also functions as a content discovery engine. When media companies leverage the social graph, they increase organic discovery on leading social networks and gain valuable insights into the habits and tastes of their most loyal viewers.

Tablets as Second-Screen Guides — Just as tablets made television content portable and personal, they are also redefining how people discover content. Netflix recently refreshed its iPad app in an effort to make it easier for people to find content. There are a number of established and emerging companies working to resolve the paradox of choice that online video is creating. When nearly everything is available online, how will we decide what to watch? Expect the winners here to offer a visually pleasing, easy to use, data-driven discovery engine.

Tablets as Universal Remotes — Tablets have even revolutionized remotes. Apple offers a free remote app for the iPad that lets users control the action from their tablet. Newer companies like Dijit are combining universal remote tablet technology with social content recommendation to deliver a more personalized viewing experience.

Tablets are bringing about a big shift in personal computing and creating unique opportunities for media companies to connect with their viewers. Those that profit will leverage video analytics and advanced content recommendation algorithms to deliver personalized viewing experiences across all connected devices.

The stakes need not be overstated: By 2015, 100 million Americans will regularly watch premium content on connected devices. While it is true that delivering broadcast-quality tablet video is only a single piece of a larger streaming media puzzle, developing an effective tablet strategy is crucial for content creators and broadcasters as we shift from broadcast to broadband video. The promise of online video lies in its ability to connect viewers with relevant content in ways traditional broadcasting never could. Tablets may not be the biggest screens, but they’ve brought about big innovations in TV tech.