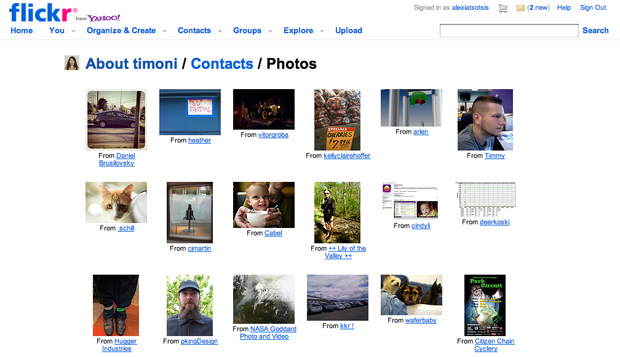 The photo-sharing space continues to heat up, and continues to leave dominant player Flickr in the dust innovation-wise. If one thing’s becoming clear, it’s that it must be really painful to work at Yahoo and have any sort of passion for good product design.

The latest example of this pain point comes from Flickr designer Timoni West, who has publicly criticized the service on her personal blog, in a post called “The Most Important Page On Flickr.” In the post Timoni links to the Flickr Contacts > Recent Uploads page and breaks down what’s wrong with it, namely that on a micro-level that there is no chronological way to sort photos, the thumbnail size is too small and there’s no way to see all of a user’s recent photos without visiting their profile.

But what West finds most problematic is that …

“The page fails on a fundamental level—it’s supposed to be where you find out what’s happened on Flickr while you were away. The current design, unfortunately, encourages random clicking, not informed exploration.

The page isn’t just outdated, it’s actively hurting Flickr, as members’ social graphs on the site become increasingly out of sync with real life. Old users forget to visit the site, new sign ups are never roped in, and Flickr, who increased member sign-ups substantially in 2010, will forego months of solid work when new members don’t come back.”

Power Flickr users, desperate for a platform that provides the sense of community early Flickr did, are moving on to Instagram, 500px and the recently launched Mlkshk. As Flickr user and developer Buzz Andersen put it, “This highly perceptive post by @Timoni almost completely covers the reasons my use of Flickr has declined over time.”

Many feel like Flickr has swerved from its original course of being a community of photographers and photosharers to being a storage center. Jason Kottke (Kottke!) referred to the problem as such, “Flickr has become a shoebox under the bed instead of the door of the refrigerator or workplace bulletin board. “

Thomas Hawk is one of the early Flickr evangelists who moved on because of lack of community, leaving the service for 500px, “500px is like Flickr was in the early day. They care about the users. Flickr doesn’t anymore … [500px CEO] Ian Sobolev is interacting with users like Stewart/Caterina did. Flickr censors, bans, deletes and talks down to their users.”

But West thinks (or rather, writes) that there’s still a glimmer of hope, that Flickr still has the ability to “kick ass in this arena.” But she modifies her assertion with “They just have to build it” and her statement is decidedly less powerful when taken in the context of the “This post is largely taken from a proposed redesign I sent out last year” sentence in the introduction.

With no such redesign in sight one can’t help but feel that West’s insightfulness is lost on Yahoo. And that Instagram should probably hire her to build its web platform.