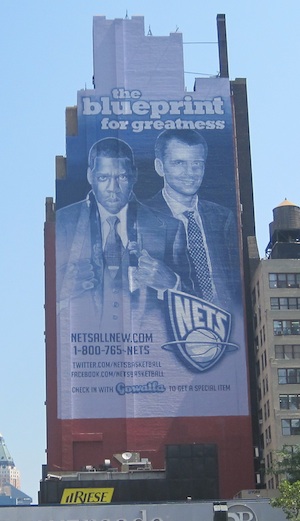 For the past week or so, it seems that every sports talk radio program and just about every show on ESPN has been talking about a billboard that just got put up in New York City. Technically, it’s a giant mural painted on the site of a building on 34th & 8th in the city. Why are people talking about it? Two reasons. First, it features the giant faces of new New Jersey Nets owner (and Russian billionaire) Mikhail Prokhorov and Nets minority owner (and hip-hop star) Jay-Z. Second, it overlooks Madison Square Garden, home of the New York Knicks basketball team.

So why are we talking about this on TechCrunch? Because the mural also prominently features a tech company. If I told you it was a tech company in the check-in space, you’d probably assume it was NY-based Foursquare. But it’s not. Instead, in huge letters at the bottom of the mural it reads, “Check in with Gowalla to get a special item.”

This partnership was the work of VaynerMedia. The company, run by brothers Gary and AJ Vaynerchuk, does new media consulting for a wide range of clients, including the Nets. Gary Vaynerchuk also happens to be an investor in Gowalla, so the partnership was an obvious one.

And the mural isn’t all just for show. As it indicates, there’s actually a Nets’ Blueprint for Greatness venue on Gowalla (created at the spot of the billboard) that users can check-in to in order to receive a special collectable item. And because Gowalla, unlike Foursquare, requires you to position yourself with GPS when you check-in, it’s basically impossible to cheat in order to get the item — you have to actually go there.

As you can see on the page, Gowalla users are also taking advantage of that services’ features by posting multiple pictures of the mural to the venue page.

It seems unlikely that the 225 x 95 foot wall is going to help the Nets lure LeBron James to New Jersey (and eventually Brooklyn, where they hope to move in a few years). But it has certainly worked in generating buzz about the team. And Gowalla was smart to hitch a ride on that in a city that their rival owns. 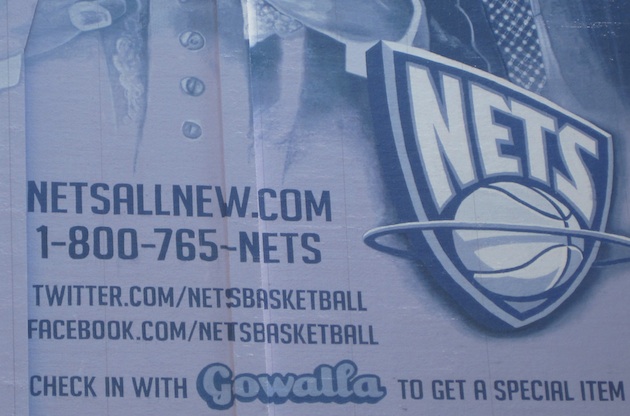