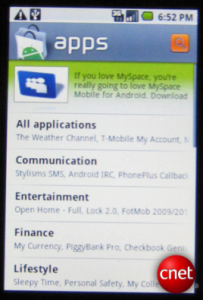 While we could debate for hours on end on the merits of the Android Marketplace, there’s one thing that is simply unarguable: the color scheme is a bit depressing. White text on a black background might look sharp, but ultimately it’s still primarily one big black screen. It gets old fast.

Seems that someone agrees – though we’re not quite sure who. Someone purportedly rocking a pre-release Motorola Sholes has sent CNET a pair of screenshots showing the App Store in a whole new light. If these are real, we have to wonder: is this Google’s doing, or Motorola’s? Does the Sholes tote an unreleased version of the App Store, or did Motorola reskin things themselves for their own sake?

We’ll find out in just over a week.